You are here: HomenextPlacesnextStreetsnextRoundhill StreetnextExploring further afield in the 1930s

Exploring further afield in the 1930s

I was born in 1928 at 17 Round Hill Street, a cul-de-sac halfway up Round Hill Road from the Round Hill Tavern. I remember that as a child I sometimes ventured further afield with my chums. Turning left at the bottom of Belton Road took our feet to the foot of Crescent Road where dwelt the Wrapson sisters, two very pretty girls who enjoyed playing doctors and nurses, but to my regret mouth to mouth resuscitation had not yet been invented so it was all very chaste! My parents had placed no restriction on my going as far as the Mayo Laundry and to look down on the coal yards of the railway.

The golf ball factory
However before one reached there and after passing The Cat’s Creep, on the left was a golf ball factory. One could stand in the doorway and watch yard upon yard of elastic being wound to form around the core. During the war it became an ARP post for the wardens who patrolled the district. If we ventured down Wakefield Road we encountered near the Upper Lewes Road an abandoned house which we regarded as haunted.  It must have been abandoned many years before the 30s because it was collapsing into ruins and I am sure has left no trace, Perhaps someone has researched its history? 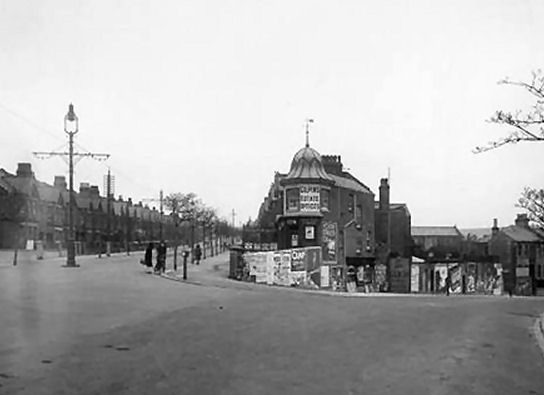 Exploring Hollingbury
That was about the limit of our easterly expeditions. To the north we had Hollingbury to explore. The trolley buses finally went up to a turning circle at the junction of the Ditchling Road and Surrenden Road.  Just south of Surrenden Road stood what we called our ‘Camp’. In fact it was a small piece of neglected woodland, which held an old tree stump which was our central rallying point. It also gave a good view to the west where the Boy Scouts held a jamboree.

Wandering in the woods
To wander over to the woods , the golf course and the allotments was a great delight. There were trees to climb, golfers, tennis players and lawn bowlers to watch with free use of our catapults – I never left home without one. I remember a day with Peter Fenemore, who became a distinguished university researcher in New Zealand, when we followed the path through the allotments in the sunshine observing the abundance of lizards. On another occasion I fell over near Five Ways and my gashed leg was bound up by a kindly Army medical orderly and his mother who lived just round the corner from my old friend Dennis Hines who followed his father’s footsteps into the Brighton Police – we share birthdates. His sister was a most distinguished person but died far too early in life.

The end of the idyll
I can scarcely believe the carefree existence  in which we indulged until 1939 put an end to the idyll which was when I changed from Ditchling Road School to Varndean. No more playing marbles in the gutter on the way home; no more putting halfpennies on the tram lines in the hope of producing pennies;  no more familiar ‘clang, clang’ from the tram whirring past.

Endless memories
Who recalls Miss Haffenden, Head of Infant School, or Miss Renno, Head of Junior School ? When I last called there in 2007 they produced a photograph and asked, “Do you know who these are ?” It was easy ! They were my class ! So we sorted out a few names and the mystery was solved. Keith Bedford from that class is still going strong in Norfolk and I am sure there must be others; perhaps George Bowles is still with us? I do hope so. Round Hill left me with enough memories to keep my brain busy on those nights when sleep is a reluctant visitor which is why I applaud the pioneers of My Brighton and Hove for their enterprise and unselfishness in this endeavour. (written from Phuket, Thailand)