You are here: HomenextPlacesnextStreetsnextSt George's RoadnextSudeley Place and East Mill 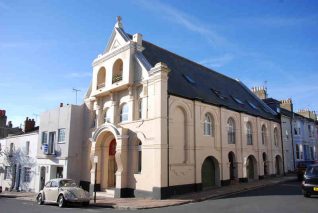 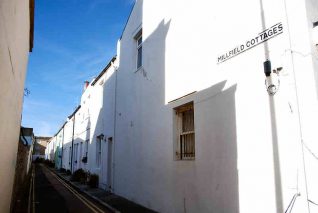 c) SUDELEY PLACE and the EAST MILL: On the western side of the attractive Sudeley Place stands the former Continentale Cinema, a small building in Renaissance style with a pitched roof and decorated facade. It originally opened in about 1891 as a Congregational chapel on the site of a temporary iron church of 1868. In 1920 the chapel was converted into the 370-seat King’s Cliff Cinema, and sound was installed in 1930. In 1947 it became the Playhouse Repertory Theatre, but was taken over by Myles Byrne in 1949 as the Playhouse Cinema. In 1951 it became the Continentale, specialising in foreign films but concentrating on pornographic films from the late 1960s until it closed in December 1986. In 1990-1 it was being converted to houses. {62,68,83,123}
Opposite the bottom end of Sudeley Place once stood the East Mill, a white post-mill probably erected in the 1790s which had a round mill-house and cottage at the rear of the later no.162 Marine Parade . In the mid 1840s it was removed to Sussex Street near Windmill Street where it was then generally known as Taylor’s Mill (see ” Albion Hill “). Millfield Cottages, a row of small houses off Sudeley Place, probably date from the 1830s and are named from this mill. {108,249a}