The Hollow - is it a twitten or a cat creep? 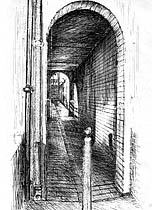 I’ve lived in Hanover Street for about 12 years, since the late 1980s. I live about halfway down the street, near the small alleyway that leads up to Hanover Terrace, St James Passage. Is it a twitten or a cat-creep? As I understand it, twittens are level, whereas cat-creeps have steps. St James Passage is mainly level, but has a few steps.This sketch of the passage was drawn and given to me by an illustrator who is a leading light among Brighton’s winter swimmers (they plunge into the sea on Christmas Day).

I remember the old brewery on Southover St, at the end of the road, going up in flames in the early 90s. I seem to remember it was arson, though I don’t know the details, or if anyone was caught. I also remember when there were Co-op dairy garages halfway down Hanover Street, where a new block of houses has been constructed. I don’t think the garages were ever in use in my time.