You are here: HomenextPlacesnextStreetsnextThe Ridgway, WoodingdeannextChildhood memories of the 1940/50s

I was born in the Brighton General Hospital in April 1943. The family home was 10 Channel View Road, Woodingdean .  I remember Mrs. Jenner’s School was a large bungalow at the bottom of our garden. It was on Warren Hill next to what was called the ‘Gap’ and opposite the woods.  Mrs. Jenner taught the violin and the noise of her pupils whilst they learnt was grim. It meant that my mother would keep all the windows closed, even in the summer.

Local families
Other people living in Channel View Road at that time were Mr & Mrs Timbs, the Lane family, Mrs. Cherry, Mr & Mrs Swan, Mr & Mrs Heather, the Johnson family, the Wright family who were builders.  I also remember the Turner family, the Pitman family, the Fowler family with a daughter called Marion.  At the age of 10 I was in love with Marion!  Last, but certainly not least, good old Dougie Holland. He was such an interesting chap who sadly passed away quiet recently I believe. 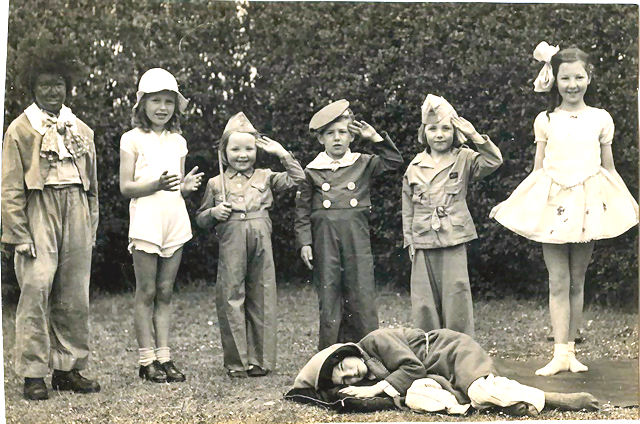 Children’s Fancy Dress competition c1946. My elder sister is second from the right

A young boy’s paradise
Growing up in Woodingdean in the late forties and fifties can only be described as a young boy’s paradise with so much open space. In summer we camped out over in Balsdean or Woodsman’s, as we called it. We played in the woods, built camps and tree houses.  Does any one remember the tramp who lived in a shack at the bottom end of the woods? He did gardening work in the village and was a curious fellow who would tell us all sorts of very grim stories about World War II .

Childhood pastimes
We would play British Bulldog across the Race Course, not on race days of course.  We often hiked down to Ovingdean , past Baker’s Farm and the Olde Vienna Café. We would go down Greenways to the Undercliff Walk.  You could catch prawns and winkles if it was low tide. We would then go along to Rottingdean for a Wall’s ice cream at the Seaspray café, which is still there to this day.  We also love to sail toy yachts on the Village Pond.  At the end of the day it would be back home on the good old No. 2 Bus, front upstairs seats of course.