You are here: HomenextPlacesnextStreetsnextWest StreetnextIn 1777 the most exclusive part of the town

In 1777 the most exclusive part of the town 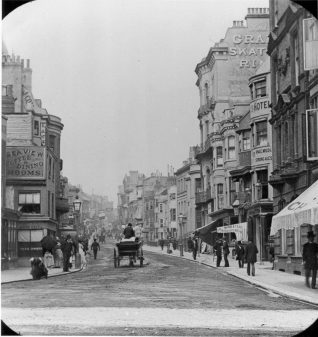 zoom
West Street looking North c1900. On the right is the Grand roller skating rink, which later became successively a 2000 seat cinema, Sherry's Dance Hall, a roller skating rink again, then the Ritz amusement arcade in the 1960s. The facade of the building was demolished in 1969 and remodelled as a night-club and amusement arcade.
Reproduced courtesy of Royal Pavilion, Libraries & Museums, Brighton & Hove 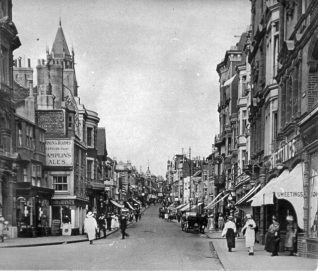 zoom
West Street looking north from the junction with King's Road c1920. The street was still very narrow as demolition of buildings on the eastern side did not commence until 1928.
Reproduced courtesy of Royal Pavilion, Libraries & Museums, Brighton & Hove

a) HISTORY: West Street, the western limit of the Old Town of Brighton, may well have been developed by the fishermen of the Lower Town when their growing population forced them onto the cliff top in about the thirteenth century. In 1777 it was considered the most exclusive part of the town, and a number of fine houses were built in the late eighteenth and early nineteenth centuries. During the same period much infilling took place and several small courtyards of houses were built off West Street, but all have now disappeared. {1,10,14,83}
West Street was also rather narrow, only twenty-eight feet wide in places, and so the upper part was widened on the eastern side at the same time as Duke Street in 1868. The major widening was undertaken by the corporation in 1928-38 when all buildings along the western side were removed with the exception of St Paul’s Church which had been built back from the road. Regency Road was then made through to Upper Russell Street, several office blocks were erected in the upper part of West Street, and the Sports Stadium and Odeon Cinema built either side of Little Russell Street. {115,116}