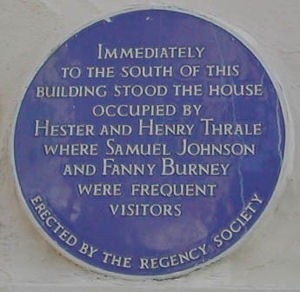 c) HENRY THRALE’S HOUSE and SHERRYS: On the pavement in front of the Pink Coconut night-club stands a small post, once one of seven chain-linked posts across the forecourt of Henry Thrale’s house and now listed as being of special historical interest. The Thrale family, owners of London’s Anchor Brewery, played host to many literary guests in the late eighteenth century including Dr Samuel Johnson and Fanny Burney, and their small, brick house, built in 1767, was one of the first of the new resort houses. It was demolished in 1866, but a mulberry tree from the garden was replanted in the grounds of Brighton College.
The house was replaced by the West Street Concert Hall, opened on 6 December 1867 and designed by Horatio Goulty with hotels at the West Street and Middle Street ends. A number of musical concerts and lectures were presented, including the first of the Music Festivals, but in 1877 the building was converted into a roller-skating rink. On the evening of 7 October 1882 it was virtually destroyed by a gas explosion and fire which left only the frontages standing, but the roller-skating hall was reconstructed in 1892. In 1911 the building was converted into a 2,000-seat cinema, the Grand Picture Palace which was renamed the Coliseum in 1918, but following another serious fire it reopened on 11 November 1919 as the famous Sherrys Dance Hall. Together with the Regent, Sherrys dominated Brighton’s pre-war night-life, but in 1949 it was converted back into a roller-skating rink and then became the Ritz amusement arcade in the 1960s. The intricate Italianate facade of the 1892 building was demolished in February 1969 when it was remodelled as a night-club and amusement arcade, now the Pink Coconut (opened 1983) and the Crystal Room; the plain Middle Street facade remains.
{3,24,26,68,68a,115,123}