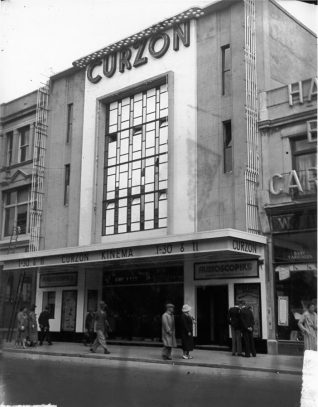 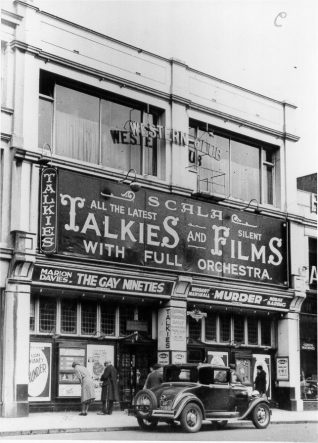 d) CURZON CINEMA: The Waitrose supermarket’s western extension stands on the site of the Curzon Cinema, which was opened by Harold Speer as the Electric Bioscope on 13 January 1909 in a converted shop with about fifty seats. The following year it was enlarged to 250 seats by taking in the adjacent shop and became the Queen’s Electric, the first authentic cinema in the town with a pit orchestra, drawn curtains, dimming lights, and continuous performances. The name changed in 1915 to the Queen’s Picture Theatre, to the Picturedrome in 1919, the Scala in 1922, the Regal in 1932, and, following a remodelling in Art Deco style, to the Curzon in 1936. Sound was eventually introduced in March 1930 after a brief stand against the new films, with the cinema advertising ‘No talkies here! Orchestra!’; there were also ‘lover’s seats’ without armrests in the circle. The Curzon was substantially redecorated in May 1958 and was taken over by Classic Cinemas Ltd in September 1965, the name being changed to the Classic in 1975 when it showed specialist films, but it finally closed on 31 August 1979 to make way for the supermarket extension. {68,68a,123}