Originally Western Road was a narrow trackway running through the West Laine from North Street to Hove Church. In the early nineteenth century a number of large houses were built with their gardens backing onto the road, terraces were known as Regent’s Place, Clarence Place and Western Place.  By 1830 Western Road, which was named after the land-owning Western family, was developed as far as Montpelier Road and was the principal access to Brunswick Town. The development of high-class residential areas on either side, ensured the prosperity of Western Road. Many more shops were then built in the gardens of the large houses, and by the 1860s virtually the entire length was lined with shops. 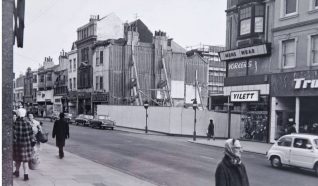 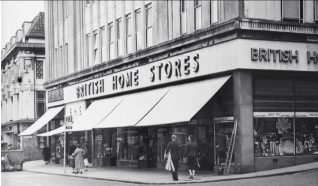 Photograph number one shows the start of the 1960s clearance of old shop properties at the extreme western end of Western Road, prior to the revealing of the vista of the new Churchill Square which had been in progress in the rear for some time. This photograph clearly shows how the one time separate houses of Western Road and Grenville Place had, over the years, been joined together to give greater depth to the ground floor shops. Photograph number two shows that this building was erected in 1931 and was occupied continuously from that year until 1969 by British Home Stores. When the stores moved to new premises in Churchill Square the building was reconstructed for occupation by C and A Modes whose store was opened in 1970. 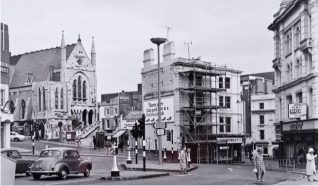 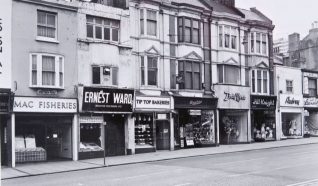 Photograph three shows a view at the end of Western Road, taken on 11 October 1970. Although the picture shows other buildings, such as the Central Free Church, its purpose was to record 1 and 2, North Street Quadrant. These buildings were about to be removed and were demolished in February 1971. Photograph four: After the extensive widening of the period 1926/1936, the road remained virtually unchanged for 30 years. Then as part of the vast West Street redevelopment, all the shop buildings on the south side between Upper Russell Street and Clarence Street were demolished during 1967. 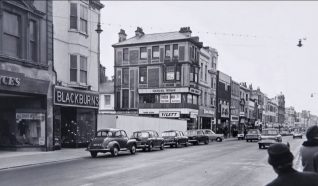 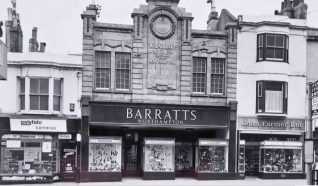 Photograph five shows the last of the doomed buildings, 22-25 Western Road, with the hoarding around the cleared site of 26, the building at the corner of Clarence Street. Photograph six shows 16-22 Western Road. Unlike the others, Barretts was a comparatively modern building having replaced much older shops in 1923.

Do you remember Western Road at this time? What about the shops – do you remember any of them. And what about prices at the time? If you can share your memories with us – please leave a comment below.