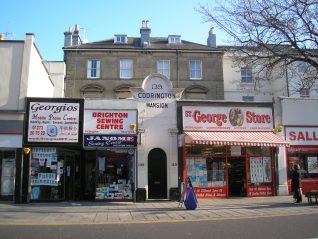 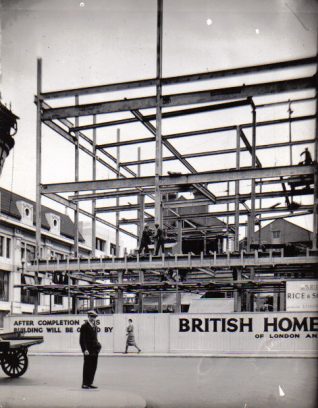 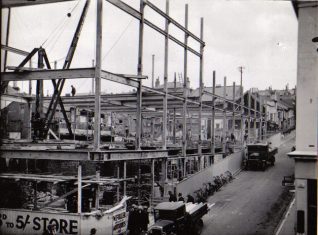 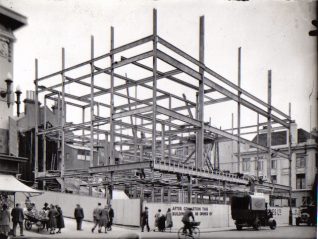 zoom
BHS Crown Street 1931, Staffords can be seen on the left
Peter Groves 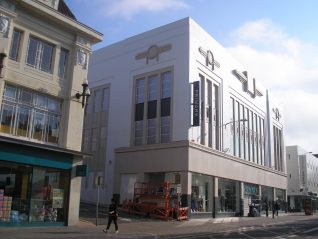 zoom
Primark 2007, was originally BHS, then C & A
Peter Groves

Western Road has been the main shopping thoroughfare in Brighton for well over 100 years and it’s almost 200 years since the first commercial activities started in the vicinity.  The area was originally called West Laine, and what was to become Western Road was just a path leading from Brighthelstone to the parish church at nearby Hove.  The name Western Road originates from the Western family who owned much of the surrounding land.

Growth and grandeur
The growth of Brighton, due to its increased popularity following the patronage by Prince Regent, pushed development outside the original boundary of East, West and North Streets.  As housing development spread from the seafront northwards so did shops and businesses.  The first commercial activities taking place in Western Road in the early 1800’s.  By 1830 its importance was established as the main access road to the new Brunswick Estate.  Although at this time there was a mix of commercial and residential properties, by the 1870’s the residential housing had mostly been replaced by shops, which in many cases had been built on the gardens of the original housing.

Gardens
Gardens with frontage onto the north side of Western Road still remained right up to the early 1900’s, however soon after the turn of the century commercialisation of Western Road was complete, and just a few “green” areas remained.

Piecemeal development
Over the previous 100 years Western Road had evolved rather than being planned. Although the south side was quite regular in its alignment, the north side was very irregular.  Between the Clock Tower and Montpelier Road there were 8 different widths of road.  Most narrow was the Clock Tower end and the stretch between Spring Street and Hampton Place.  It was reported that in places the road was so narrow that it was difficult for vehicles to pass.

Pre WWI development
For some years the Town Council had been purchasing properties in congested areas of Western Road and letting them until the leases had expired.  In 1906 the large gardens in front of Codrington Place (between Hampton Place and Montpelier Road) were removed in this manner to allow the widening of one of the narrowest parts of Western Road.  Remnants of the old residential properties can still be seen here.  By looking above the shops, the original grand housing can be still be seen, the shops now built on what was once part of the garden, which originally came much further forward.  CodringtonMansion is of this type, built in about 1830, it was the home of Admiral Sir Edward Codrington, who captained HMS Orion in the Battle of Trafalgar in 1805.

North side development chronology
The first of these developments started in 1923, Smithers’ Brewery was demolished to make way for the Imperial Arcade.  This was followed by Staffords departmental store in 1926, which was the first large departmental store in Western Road, Poundland and the Co-operative Bank currently occupy this site.  The eastern corner of Staffords can just be seen in the 1931 photo of British Home Stores under construction, and the same torchlights can still be recognised today.  Further westwards the new Boots store was next in 1928.  It was built on the site of the previous old Boots store between Spring Street and Crown Street.  Wades store was also built in 1928, which was clearly a busy time for redevelopment.  Johnson’s the furnishers had traded from Western Road since the very early 1900’s, they celebrated 25 years of trading by rebuilding their store in 1929.  Woolworths expanded their premises shortly afterwards.  British Home Stores was next in 1931.  These unique photographs show the new BHS development in progress between Crown Street and Marlborough Street.  The building was taken over in the late 1960’s by C & A when BHS moved to their new premises in Churchill Square, however following refurbishment it is now home to Primark.

75  years of Marks & Spencers
The Marks & Spencers building was next in 1932, and the frontage still remains much as it was when first built.  Marks & Spencers are probably the longest surviving business in Western Road, still operating from the same building, having now been there 75 years!  The area between the Imperial Arcade and Clock Tower end of Western Road was next in 1934.  This area was made up of many small businesses including a Public House and the last remaining private dwellings all clustered together.  A number of fine photographs have been published showing the demolition in progress.  Lastly in 1935 Mitre House, opposite the top of Preston Street was built.  This consisted of a grocery store for International Stores on the ground floor with offices and flats above.  Later the ground floor became the prestigious showroom for Jaguar cars.

South side development
The development of the north side was now complete, with mainly large stores all along that side.  Plans to redevelop the south side were considered and although some slum clearance was started, the outbreak of World War II put a halt to grand ideas.  Following the war, due to a shortage of building materials development could not be restarted and it was not until 1959 that the plans were back on the council agenda.  However it was almost 10 years before finally in 1968 that Churchill Square was formally opened.