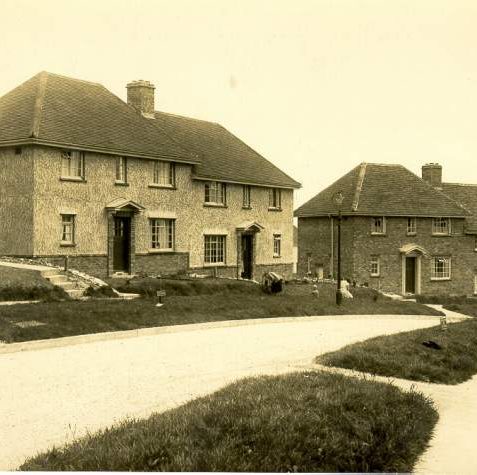 Four recently built council houses with metal casement windows in Twineham Road, Whitehawk. Between 1933-37 about 1200 houses with large gardens for growing vegetables were built. From 1975 onwards much of Whitehawk was rebuilt as smaller houses in small cul-de-sacs.
Image reproduced with kind permission from Brighton and Hove in Pictures by Brighton and Hove City Council 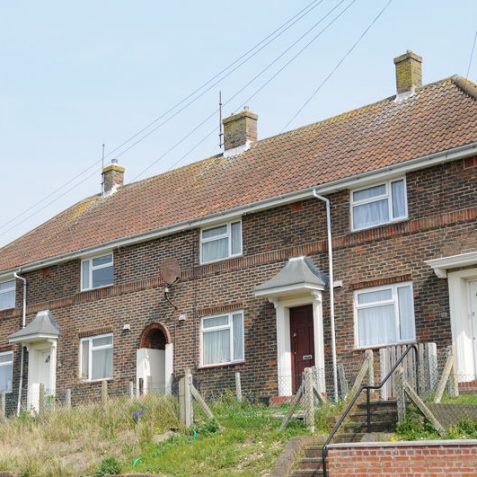 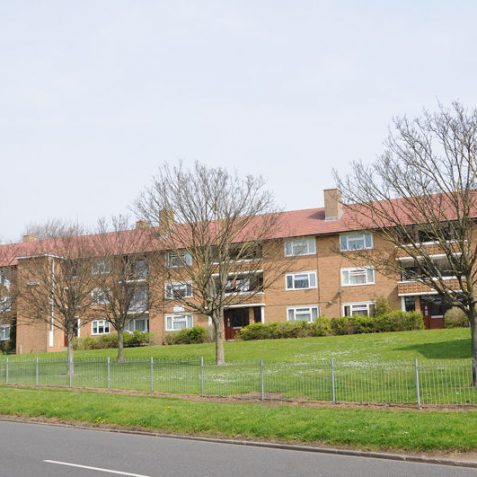 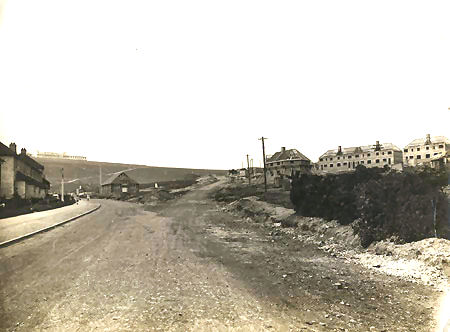 This photographic print shows an unidentified street in Whitehawk, Brighton. It was taken shorlty before the development of the estate in the 1930s. It was probably taken by the Borough Surveyor's department.
Reproduced courtesy of Royal Pavilion and Museums Brighton and Hove

b) HISTORY AND DEVELOPMENT: From the late eighteenth century the main attractions of the area were the races run on Whitehawk Down (renamed Race Hill), and the associated White Hawk Fair which was held from 1791 for some years. It was after visiting the fair one day that Editha Elmore, daughter of the squire of Woodingdean, disappeared. She was later said to haunt the area as the ‘White Hawk Lady’ leaving a cloven footprint behind, but her spirit was not seen again after 1807 when a woman’s bones were found {6}. Whitehawk Hill was also the site of a telegraphic station from at least the early nineteenth century, and is now the site of the town’s main television and radio transmitter (see “Broadcasting“) {108}.
Whitehawk Bottom formed the eastern limit of the parish of Brighton, the boundary running along the former course of Whitehawk Road (including Haybourne Road), but when the East Brighton estate was purchased in September 1913 the area now occupied by the Whitehawk housing estate became corporation property and it became part of the county borough itself on 1 April 1928 when Ovingdean parish was annexed. The south-western most part of Whitehawk Road was developed in the early 1880s, but Whitehawk Bottom contained only a few farm buildings, piggeries, allotments and playing fields until the late 1920s when the corporation erected houses along the western side of Whitehawk Road and in Hervey Road and Whitehawk Crescent. The large council estate was then developed in 1933-7 with nearly 1,200 houses, all with large gardens for growing vegetables but none with garages. Private housing was added near Wilson Avenue post-war, and the corporation’s Swanborough flats opened in 1967. In 1981 the population of Whitehawk (together with Manor Farm) was nearly 8,000. {2,83,109,277,305}
In 1975 the rebuilding of Whitehawk and its drab housing began. By radically altering road alignments, many small cul-de-sacs have been created in the Whitehawk Crescent and Whitehawk Avenue areas, increasing the number of houses but making the estate more attractive; the scheme involved 1,440 new houses. By 1988 redevelopment south of Lintott Avenue was complete and work was proceeding on large areas to the north, but financial restrictions had slowed down the project somewhat. A major new road, Whitehawk Way, has been constructed along the line of Whitehawk Avenue and Fletching Road, and a new park has been laid out over Lintott Avenue. {123}