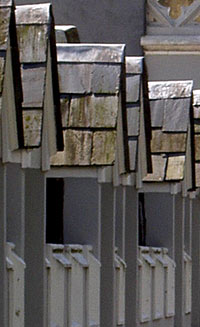 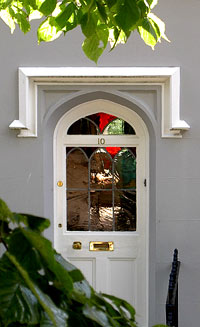 Just up from the clock tower and the bustling heart of Brighton, lies a gothic inspired terrace, an oasis of calm set behind a thick stone wall, sheltering from the city. Wykeham Terrace, built between 1822 and 1830, has been home to soldiers, squatters and even former prostitutes, although it now seems far more genteel. I interviewed a current resident, Michael Fisher to discover what it is really like living in one of Brighton’s most intriguing buildings.

Michael Fisher has lived at no. 9 Wykeham Terrace for the past 14 years. A resident of Brighton since 1969, Michael’s first memory of Wykeham Terrace is of the time when the property was occupied by squatters, during 1969. Although not recalling the exact reasons behind the occupation, Michael points out that this was a time of a great deal of social unrest in the country at large, with housing and other social problems.

After the squatters were evicted from the property, the Territorial Army decided to sell the Terrace to a property developer. Restoring the historic building back to its’ original state meant that the flats which the TA had used for billeting its’ soldiers were once again converted back into individual houses. Interestingly, Michael pointed out that the houses on the western side of the terrace are numbered from 7-12, with a 7a next to no.7. It was considered unlucky to have a number 13 in the row!

Asked what he loved about living in Wykeham Terrace, Mr Fisher enthused about the sense of history and the many stories which the building had to tell. “I love the sense of history here… when I moved in and was redecorating the house, I remember finding Territorial Army colours on the walls when I peeled back the wallpaper. They used to billet their soldiers here; in fact one time a couple were standing outside the gate looking at the house. I asked them if they had a particular interest in the terrace, and they told me that they used to live here, on the top floor of my house in fact!

I love the history of the Reverend Wagner and St Mary’s (Home For Female Penitents), because of course Brighton had a big problem with prostitution at the time. Of course I love the fact that it is so central, and next to the churchyard (St Nicholas‘). It’s also incredibly quiet here, because the walls are so thick.” (There is certainly an air of tranquillity here that you would not expect to find, just yards from Churchill Square.) “I think it’s something to do with the nuns, because you know that they used to run St Mary’s here.”

St Mary’s Home For Female Penitent’s was a home for ‘fallen women’ (prostitutes) and unmarried women situated in Wykeham Terrace. Established in 1855, the home was the idea of Reverend Arthur Wagner, who ran the nearby St Paul’s Church in neighbouring West Street. Brighton was known for being home to a large numbers of prostitutes at the time, and the prevailing Victorian values of the time lead to an attempt to clear the streets of a number of them by setting up St Mary’s, run by the nuns of that order.

Although home to a relatively small number of tenants, Wykeham Terrace has a strong sense of community. “There is definitely a sense of community here; several residents have lived here since the redevelopment, so that’s over 30 years! We have a resident’s association and the place has to be painted very five years, the same colour. This is actually set by building regulations, since the building is covenanted.”

Wykeham Terrace has also been home to a number of more well-known residents. Dame Flora Robson used to live next-door to Mr Fisher’s home at number 8. Number 1 Wykeham Terrace has apparently housed not one but two 1960s pop stars: Leo Sayer and Adam Faith both occupied the property in the past.