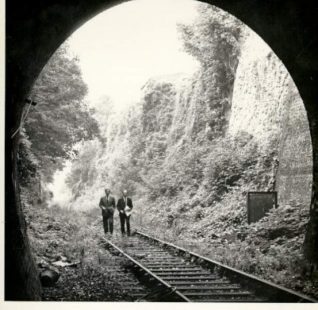 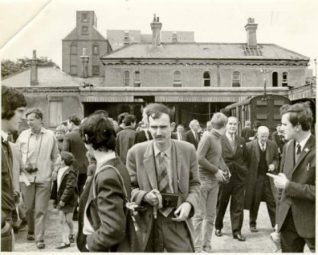 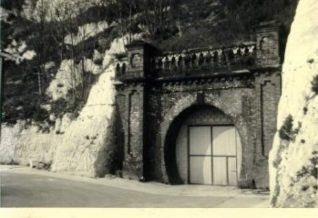 Built in 1866-9 by the London, Brighton and South Coast Railway Company under an Act of May 1864, the KempTown branch line was opened principally to fend off a possible rival line into eastern Brighton. The first turf was cut by the mayor, Henry Martin, on 17 February 1866, and the line opened on 2 August 1869. It was a single track, 1 mile 726 yards long, leaving the Lewes line 1,606 yards from Brighton at Kemp Town Junction; the short section from the junction to Lewes Road Station was doubled in July 1895. The journey from Brighton was therefore over 2.3 miles long, about twice the distance by road.
Services were temporarily withdrawn from 1 January 1917 until 10 August 1919, but after attracting some 70,000 to 80,000 passengers annually in the late 1920s, passenger services were permanently withdrawn on 31 December 1932 having been badly affected by competition from buses. The line was then used by goods traffic only and KempTown became the Brighton East goods-depot, but in August 1971 the line finally closed and the goods traffic was transferred to Hove. A final, commemorative, diesel passenger service was run on 26 June 1971; the driver  was Stanley Walters who was a hero of the Battle of Monte Casino.
Despite its short length, the line was heavily engineered. The Lewes Road Viaduct, about 180 yards long, carried the track fifty feet above Lewes Road and Melbourne Street, but was demolished in April 1976; the western arches were removed later in 1983 for the new Vogue gyratory road layout and the erection of the Sainsburys superstore. Hartington Road was crossed on a three-arch viaduct (demolished 2 December 1973), and the line then ran through a cutting, now partially filled and levelled as a large recreation ground behind Picton Street, William Clarke Park. Beneath ElmGroveJuniorSchool the line entered the 946-yard Kemp Town Tunnel, to emerge from the chalk cliffs at the northern end of Kemp Town Station yard. From October 1941 until May 1944 the tunnel was used as a store for rail stock and was also made available for use as an air-raid shelter {123}. Part of the tunnel is now used as a mushroom farm, and the almost circular southern portal may still be seen behind the Booker warehouse in Stevenson Road.
Kemp Town Station stood in the former Coalbrook Road, and opened in 1869 with four sidings and one platform, but by 1880 a large goods-yard and coal depot with seventeen sidings had opened. The station building was similar to those at Hove, London Road and Portslade, but nothing now remains of it; the large Freshfield Industrial Estate was opened on the site in June 1974, and by 1987 over 500 people were employed there. Lewes Road Station opened on 1 September 1873 on a site behind the Rediffusion factory in D’Aubigny Road, with another approach via a footpath from Lewes Road. There was a small station building and two platforms connected by a footbridge, but it closed to passengers along with the rest of the line at the end of 1932 and became first a pickle factory and then a builder’s store. The area to the west was used as a goods yard, but the whole site is now occupied by the Centenary Industrial Estate of 1986. Hartington Road Halt was a single platform on the western side of the track just to the south of Hartington Road, and was accessed by a cinder path between Hartington Road and Upper Wellington Road. It opened on 1 January 1906 but closed on 1 June 1911.