You are here: HomenextAreasnextSt James's StreetnextChildhood memories of the coach station

Childhood memories of the coach station 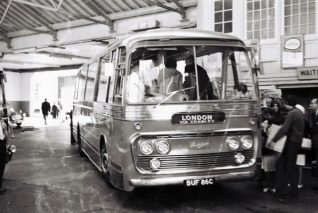 Each summer an aunt and uncle would come to stay with us from London via Southdown coach. We would go and meet them in the coach station in Steine Street. I was between three and six years old at the time. At that age I would identify different buses and coaches by their wheels, and I would even give them my own made-up names. Most of them, the Leylands, made a ‘kind’ noise, but there was one type which made an ‘angry’ noise, these had more chrome in the centre of the wheel.

Do you remember travelling on a Southdown coach? If you can share your memories with us, please leave a comment below.

Engines to be wary of

If I saw one of these coaches come in I would stand back as it seemed to be the practice in those days, to rev up just before cutting off the engine. I later discovered that these ‘angry’ coaches were different, made by Commers, and had two stroke oil engines. Many years later I came to use a two stroke oil engine, it would sometimes start up backwards, giving three reverse gears and one forwards. Needless to say, these types of engine were feared by man and boy alike