You are here: HomenextPlacesnextTransportnextVolks Electric RailwaynextDamage, further extension and improvements 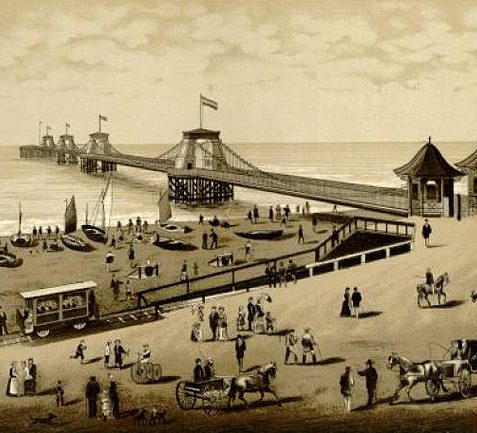 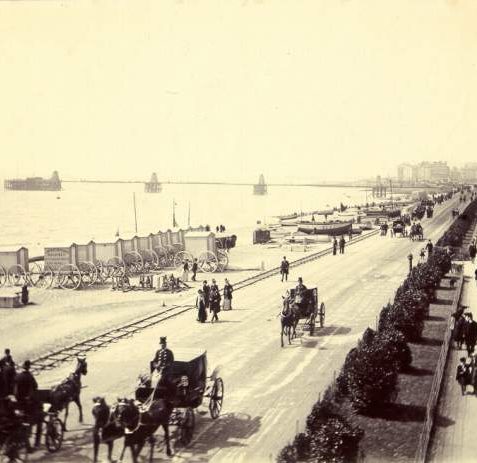 Seafront looking West from Kemp Town, c. 1895. A view of the seafront looking west from Kemp Town towards the Chain Pier. The Volk's Electric Railway track can be seen running along the beach, on which there are numerous boats and bathing machines. People can be seen promenading along a pathway now covered by the arched Madeira Terrace.
Image reproduced with kind permission from Brighton and Hove in Pictures by Brighton and Hove City Council 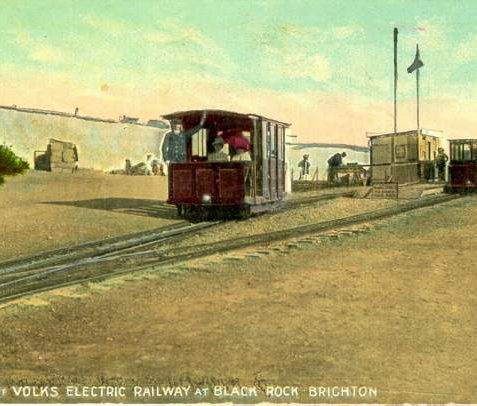 In 1901 Magnus Volk was permitted to extend his 1883 electric railway eastwards from Paston Place to Black Rock, where the small station shown here was built. New stations were built at Black Rock in 1911 and 1937 when the Swimming Pool opened.
Image reproduced with kind permission from Brighton and Hove in Pictures by Brighton and Hove City Council 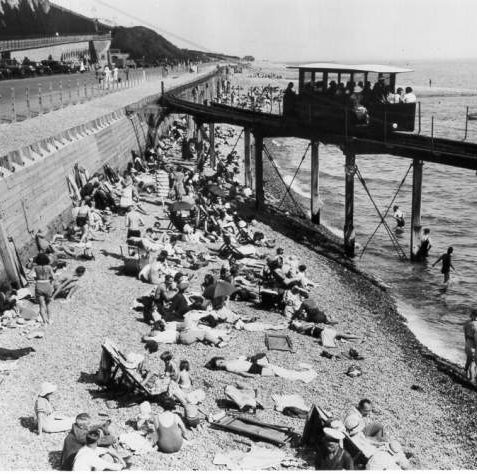 c) DAMAGE and FURTHER EXTENSION: On 4-5 December 1896 the wreckage of the Chain Pier caused considerable damage to the railway and £1,500 was claimed. The Sussex Daily News ran a public subscription to help fund repairs, and the line reopened in the spring of 1897. By 1899 five cars were operating, and Volk negotiated a 21-year lease with the council for the land occupied at six-months’ notice. In February 1901 Volk received permission for an extension to Black Rock to compensate for the loss of his Rottingdean Railway ; the new track, which opened the same year, was laid on a viaduct eastwards from the Banjo Groyne and then along the roadway to a terminus below the French Convalescent Home . Permission was not initially given to run cars across the Banjo Groyne however, but Volk laid the tracks anyway and through-running was allowed from January 1902 to give a maximum length of about one-and-three-quarter miles; the Paston Place terminus therefore became a through station. In 1902 also, the corporation’s electricity supply was used instead of Volk’s own generator.

d) FURTHER IMPROVEMENTS: In April 1906 the tracks were relaid with ramps and bridges following improvements to Madeira Drive , and Black Rock Station was improved and reopened on 15 April 1911. However, in May 1915 a boy fresh from bathing was electrocuted, and although no negligence was found on the railway’s part Volk agreed to enclose the live rail. A new 21-year lease was granted in March 1922, but when Madeira Drive was widened in 1929-30 a new Aquarium Station was opened by the mayor, Sidney Thompson, on 27 June 1930 with the line slightly shortened. On 7 May 1937 a new Black Rock Station was opened to the west of the old station which was demolished for the new open-air swimming-pool.