A focus for devotion

The word ‘rood’ comes from the Old Saxon ‘roda’ meaning a cross. A rood-screen was so called because above it was the Rood or the Cross of Christ. On either side of the cross were figures of St Mary the Virgin and St John the Evangelist. Pugin (1812 1852), the famous architect and designer, suggested that in an English Parish Church, the screen was indispensable. In the first place it was there to support the Rood, or great Crucifix, with its attendant figures of Our Lady and St. John, as the principle focus of devotion for the people in the nave. The screen also acted as a kind of window, through which those in the nave could view the splendours of the chancel during Mass – a foretaste of heaven, and the life of the world to come. 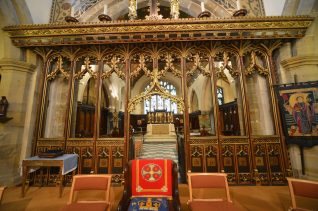 Rood screen viewed from the nave 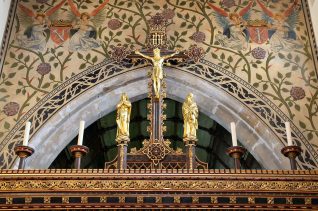 A physical and symbolic division

In medieval times the nave was used for secular purposes, often being the only public meeting place in the village. The rood-screen, which divided the chancel from the nave, also marked the boundary for the upkeep of the church. Repairs in the nave were the responsibility of the parish whereas those in the chancel were undertaken by the rector. This is one reason why the two parts invariably differ in size. In bygone days the entrance to the chancel was the usual starting place for marriages and confirmations. 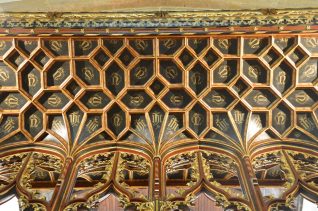 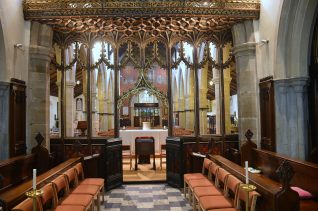 Rodd screen viewed from the chancel

Dates from the 15th cenury

The Rood Screen at St Nicholas is generally thought to be late 15th century. There is a reference to a Rood Screen before the Reformation, but it is not clear they are one and the same. In the 1853 restoration by R C Carpenter, it was found that the screen had been previously cut down to fit. The existing cornice, cross and gates were donated by Alderman JL Brigden who was Mayor of Brighton for four terms at the end of the 19th century. The Rood Screen in St Nicholas no longer symbolises the demarcation between clergy and congregation. In the late 1970s it was decided to install a Nave Altar in front of the screen and the pulpit was brought forward. So the focus of worship was transferred from the exclusivity of the sanctuary, to the body of the church with the congregation.