Domesday Book: There is a church 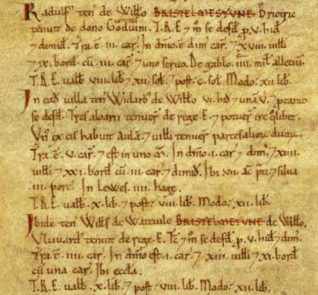 zoom
Bristelmestune's entry in the Domesday Book. Click on the image to open a large version in a new window.
National Archives

At Christmas 1085 King William I, known as William the Conqueror, commissioned a survey to discover the resources and taxable values of all the boroughs and manors in England. The survey actually started around mid-January 1086. William wanted to discover who owned what, how much it was worth and how much was owed to him as King in tax, rents, and military service.

The image here shows the actual page in the Domesday Book which describes the Brighton settlement; the translation of the entry is also shown; it was written in abbreviated Latin. Brighton at that time was known as ‘Bristelmestune’. In the last paragraph it states ‘There is a church’. The present St Nicholas’ was most probably built about the middle of the 14th century on the site of that church. Some historians believe that the original church was situated near the shore and was destroyed by the encroachments of the sea; no evidence of that assumption has ever been found.

Translation of the Domesday text

Ralph holds Bristelmestune of William. Beorhtric held it by grant of Earl Godwine. TRE, as now, it was assessed at 5 ½ hides. There is land for 3 ploughs. In demesne is half a plough; and 18 villans and 9bordars with 3 ploughs, and 1 slave. From rents, 4,000 herrings. TRE it was worth 8l12s ; and afterwards100s ; now 12l.

In the same vill Widard holds of William 6 hides and 1 virgate, and at so much they are assessed. 3 alodiaries held them of King Edward, and could go where they pleased. 1 of them had a hall, and villans held the shares of the other 2. There is land for 5 ploughs, and it is in 1 manor. l In demesne [are] 1 ½ ploughs; and 14 villans and 21 bordars with 3 ½ ploughs. There are 7 acres of meadow, and woodland for 3 pigs. In Lewes, 4 closes. TRE it was worth 10l ; and afterwards 8l ; now 12l.

In the same place William de Vatteville holds Bristelmestune of William. Wulfweard held it of King Edward. Then, as now, it was assessed at 5 ½ hides. There is land for 4 ploughs. In demesne is 1 plough; and 13 villans and 11 bordars with 1 plough. There is a church. TRE it was worth 10l ; and afterwards 8l ; now 12l.