The Duke of Wellington memorial was produced by John Birnie Philip (1824-1875) a nineteenth century English sculptor. The 1853 restoration of St Nicholas’ was undertaken in memory of the Duke who had worshipped in the church as a boy. The Latin inscription on the brass plates on the memorial translates as:

In memory of the great Duke of Wellington this sacred building in which, in his youth, he worshipped God, is restored

The following description of the memorial was published in 1854.

‘The memorial is in the style of an Eleanor Cross. The shape is hexagonal. The pedestal commences with a richly moulded base. On the base of the pedestal rests a plinth, covered with diaper work, surmounted by another moulding, on the broad champher of which is an inscription, in old English characters in brass, each line being represented by an angle of the monument. From the pedestal, and above the inscribed moulding, rise two storeys, richly and elaborately decorated with open tracery work and crocketted pinnacles. These are separated by a pierced parapet; a similar one is on the third or upper storey, which is a solid stone drum, each face of which is also ornamented by sunken and carved panels. There follows a canopied niche with a pierced spire surmounted by a finial. In the niche is an alabaster figure of St. George, sheathing his sword over the dragon which lies slain at his feet, symbolic of the career of the Duke. The drum and everything above it rests on a shaft of dark, polished marble which emerges from the pedestal and around which winds a scroll bearing the names of four of the achievements which mark different era’s in Wellington’s military career. Assaye represents the Duke’s Indian Campaign; Torres Vedras, his successful defence of Portugal; Vittoria, the victory which delivered Spain; and Waterloo, the battle which saved Europe.’ 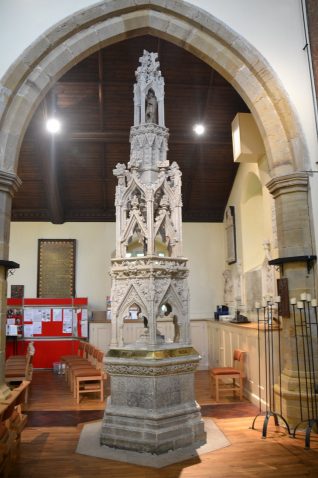 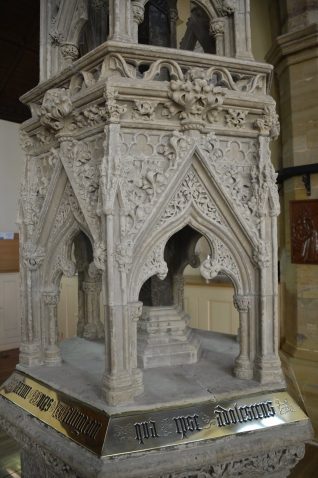 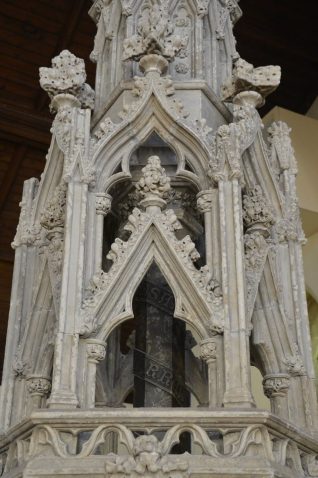 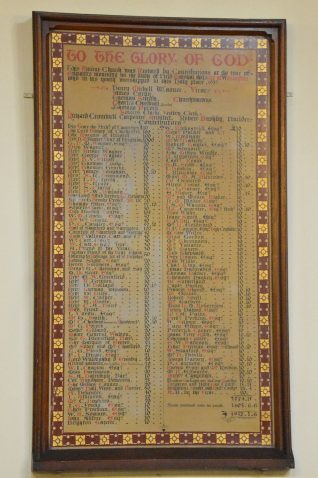