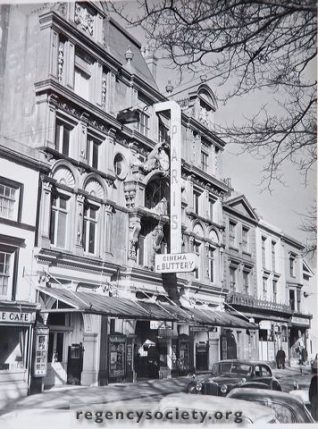 zoom
The Paris Cinema. It was opened in 1854 as the Oxford Music Hall and then became the Empire Theatre of Varieties. By the first decade of this century it was the court Cinema and this lasted for nearly 40 years. In the 1940s it reverted to the stage being successfully the Dolphin and her Majesty's Theatre. Finally a few years as the Paris Cinema before oblivion. This photograph, dated 2 March 1963 was taken just before the building was sold for subsequent demolition.
Image reproduced with kind permission of The Regency Society and The James Gray Collection

My father, Patrick Desmond (1907-1976), was in the theatre and had adopted Brighton as his home town. He loved the sea and he loved the people. He was a regular visitor/resident from the late 1940s until he died.  I visited the town for the first time in 1950 at around the time he and his second wife, actress Stella Linden, were living in an Arundel Terrace basement flat which they shared with a young actor and budding playwright called John Osborne. Stella helped John write his first play to be staged, ‘The Devil Inside Him’, which Stella directed.

My father had taken his touring production of ‘Rain’, a play based on Somerset Maugham’s story about Sadie Thompson, to the Dolphin Theatre in early 1950. Stella played the vamp, Sadie Thompson, and an old actor friend from Brighton, George Dillon, played the Captain. It was a successful week and the managing director of the theatre, J. Baxter Somerville, agreed my father could present a summer season of plays commencing 1st July 1950.

The Dolphin Theatre had a good summer, with a selection of plays showcasing the talents of popular performers invited down to Brighton for special appearances. My father and Stella moved into a flat in Brunswick Terrace, Hove. I remember visiting them there at what to me at my young age was an opulent abode. After the show, we would meet in the Dolphin Buttery & Bar below the theatre on New Road. I believe the bar was run by Ken Riddington and his wife.

Do you have any memories of the Dolphin to share? If you have please leave a comment below

The repertory season was extended, but business deteriorated as the holidaymakers departed and the residents returned. The Dolphin Theatre found it difficult to compete with the Theatre Royal only two doors away. J. Baxter Somerville changed the theatre’s name to Her Majesty’s in 1952 and my father returned the following year to direct a short season of plays with prominent guest artists, but it closed as a live theatre in 1955. It became the Paris Continental Cinema showing foreign films, then closed for good in 1963; the building was demolished in 1967.

A sad end to a theatre that had contributed much to the enjoyment of Brighton’s residents over the years. It had started life as a Music Hall and all the variety stars of the late Victorian era appeared on its stage. It had burned down, been re-built as a theatre and had become The Coliseum when J. Baxter Somerville bought it in 1945, changing its name to the Dolphin in 1947.