You are here: HomenextPlacesnextTwittensnextJew Street

There were Jewish residents in Brighton from the second half of the 1700’s. Jew Street itself is named from Brighton’s first synagogue which was probably sited at the southern end, from about 1792, and is said to have also had a school. The synagogue had moved to Poune’s Court off West Street by 1808 before finding a permanent home in Devonshire Place. 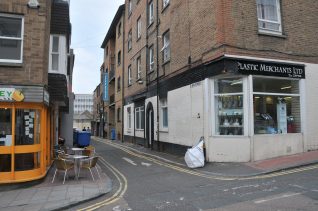 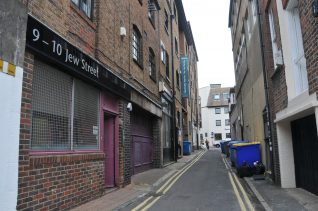 At the corner of Jew Street and Church Street are the Model Dwellings, a five-storey block of flats originally built as housing for the poor of the town in about 1852 by a charitable trust under Dr William Kebbell.  The charity’s intention was to provide decent quality properties at a rent that working people could afford. Each of the fifteen flats in this block had three rooms, a separate scullery and a lavatory. Another block was erected in Clarence Yard in 1854, but was removed when the Head Post Office was extended in 1892.