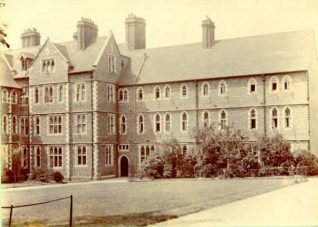 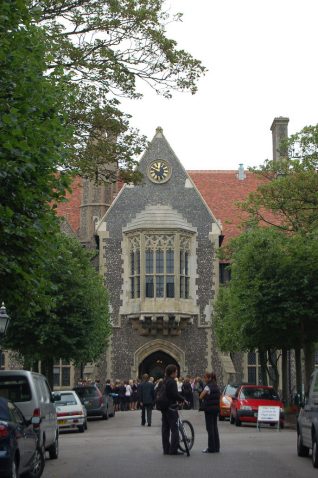 a) HISTORY: The town’s public school for boys opened as Portland House boarding school on 26 January 1847 at 13 Portland Place (now part of Pearson House) under principal Revd Arthur MacLeane; the school had forty-seven boys and included a junior department. Its aim was to provide ‘a thoroughly liberal and practical education in conformity with the principles of the Established Church’. Plans were soon made for a new permanent building on the northern side of Eastern Road, a Gothic design in flint by Sir George Gilbert Scott; the foundation stone was laid on 27 June 1848 by the Bishop of Chichester, and the new school building was opened in about June 1849 by the Earl of Chichester.

At first the boys were boarded in nearby lodgings and the present library was used as a chapel, but School House, for the accommodation of boys, was added in 1854 together with the headmaster’s house. The school grew steadily: a new chapel, also by Scott, was added in September 1859, and by 1863 there were 200 pupils. The south-western blocks were erected in 1885 (Chichester House) and 1887 by Sir Thomas Jackson who, in 1922, greatly enlarged the chapel as a memorial to old boys lost in the Great War. The junior school occupied part of the south-western block from 1895 until 1918 before moving to 16 Lewes Crescent; it returned during the Second World War, but in 1945 moved across Eastern Road to the former Deaf and Dumb School (erected 1848) before moving to Walpole Lodge, formerly the Convent of the Blessed Sacrament, in 1971. In 1942 the engineering workshops were given over to the war effort as a munitions factory.

Other prominent buildings in the school complex include the school hall (opened 1914); the swimming-pool and gymnasium (1923); the south-eastern block (1930); the science block (1958); the workshops and day-boy houses (1959); the Woolton Building (1972); the sports hall (1973); a new classroom block and pavilion (1980); computing/electronics/maths block (1986); and the day-girls house (1989). In July 1962 Queen Elizabeth II unveiled a plaque on the chapel wall. The main school building is now listed as being of special architectural and historic importance.

The school currently has about 460 pupils; girls were first admitted in 1973 to the sixth form, but in 1988 the school went completely coeducational. It is divided into five day houses (Aldrich, Durnford, Hampden, Leconfield, and Ryle), and two boarding houses (Chichester and School); the girls are in Fenwick House. Gordon, Stenning, Walpole and Wilson houses were disbanded during the financial crises of the 1930s and 1940s, and Bristol in 1983. The large playing field has been called the best cricket ground in the county after the County Ground; the school has also used playing fields at East Brighton Park since 1925 when it moved from the fields at Manor Farm used since the 1910s.

c) CONSERVATION AREA: The school grounds and the attractive residential area around Brighton College, including the impressive late-nineteenth-century houses of College Terrace (1880s), Walpole Road (1860s) and Walpole Terrace (1870s), were designated as the College conservation area in 1988.

Just outside the conservation area at the corner of Sutherland Road and College Terrace stands St Matthew’s Court, built on the site of St Matthew’s Church. Erected with a small tower in 1881-3, the building was designed in Early English style by John Horton and faced in knapped flint with stone dressings. The church had a wide nave and narrow aisles, but was demolished in 1967 and the parish merged with St Mark’s. Connected with the church was the Bute Mission Hall, now the Rainbow Nursery at the corner of Sutherland Road and Rochester Street. This building, which has foundation stones laid ‘on behalf of Sunday Scholars’ by the mayor and mayoress, Sir Joseph and Lady Ewart, on 28 July 1892, served the surrounding densely-populated area which was developed in the 1870s. {1,45,62,83,331}