You are here: HomenextTopicsnext1950snext1950s personal memoriesnextThe dustman, coalman and rag and bone man

The dustman, coalman and rag and bone man 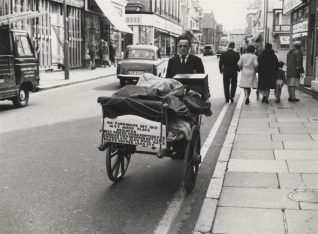 In the 1950s we lived in Belton Road, in the Roundhill Area. There were two regular visitors to the house; the dustman and the coalman. Belton road was made up of small, terraced houses. There was no access to the gardens, behind and the pavement, in front, was fairly narrow, so access was difficult.

Today it seems odd to think of these men walking through the house but, clearly, it was common practice then. Some householders also had ‘pig bins’, small, metal bins with a ‘locking’ cover that kept birds and small animals from getting in. The pig bin was for leftover vegetable matter. Why some houses had them and not others, I do not know.