You are here: HomenextTopicsnextAllotmentsnextAn introduction and historynextA chronicle of Brighton and Hove allotments

A chronicle of Brighton and Hove allotments 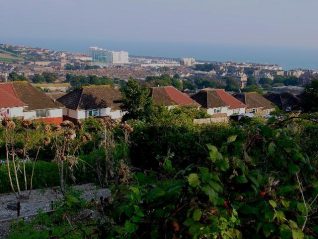 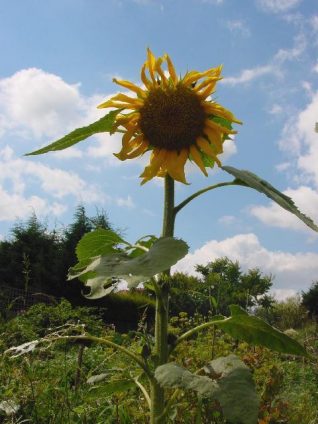 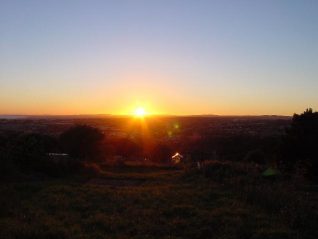 The Brighton History Centre holds a file of newspaper cuttings on allotments (as they do on many other topics you may be interested in). This sample provides snapshots at two different eras – during World War Two, and from the late 1980s to the current day – and give an impression of how the allotment is standing the test of time.

Brighton is “Allotment-minded” (Brighton Herald, 1 June 1940)
“Brighton has been “allotment minded” even before the war, when it had one allotment to each 16 families. Now with the organization of a “Dig for Victory” campaign, it has one allotment to every 12 families…war-time allotment areas have been acquired and pegged out at fifteen well-distributed centres throughout the borough…The total number of war-time allotment holders is now approximately 800…there has been a widespread publicity effort…over 500 posters, specially designed, were distributed on Corporation and other property throughout the borough…the borough [has been] divided into three areas; each of these [has] an inspector…their duties, apart from much work undertaken for the Ministry of Agriculture and Fisheries, [has] been to contact with prospective holders; advise them on the most suitable contribution they can make to the war effort; see them satisfied with their plot; supervise any publicity in the area and generally hold themselves available to attend any of the multitudinous queries and complaints…[the Horticultural Committee] propose that a big war-time food production show shall be held in the Dome and shall embrace existing societies, wartime allotment holders and private gardens, including housing estates…”

Dig for certificates (Brighton Herald, 22 June 1940)
“Anybody who has an allotment and is industriously “Digging for Victory” can now join in a scheme for the award of certificates of merit…the object is to encourage allotment holders to produce vegetable crops in a way which will ensure a supply of produce for the greater part of the year…marks will be given for cultivation, compost heap, weed control, rotation of crops, neatness and finish, growth of plants, yield of crops, and cleanliness of crops…it is hoped that friendly rivalry and the desire to possess a handsome certificate will greatly speed up the production of food by the “victory diggers”…entry forms can be obtained from the Park Superintendent, Moulsecombe Place (Brighton 4988).”

Grow-your-own is dying trend (The Leader, 27 Oct 1988)
“Almost one in five allotments in Brighton and Hove are lying fallow. And councils warn unless they are taken up the land could be given over for development. John Philips assistant director of leisure services at Hove told the Leader: “Four years ago we used to have a waiting list but now 167 of our 990 plots are empty. If too much of our land is idle we could be told we should be doing something with it…And once it goes it’s not replaceable”…Brighton’s allotments range in price from £4.70 a year for pensioners to £16 for the largest plots.”

Joyride thugs’ rampage (The Evening Argus, 1 September 1992)
“Vandals in a stolen car went on a wrecking spree at Brighton allotments. About 40 greenhouses and sheds at the council-owned Roedale plots off Ditchling Road were attacked, causing thousands of pounds worth of damage…A retired couple from Stanmore Park Road who did not want to be named, had their greenhouse wrecked. The wife said: “You do your utmost to keep everything nice and now it has all been ruined. They are just absolutely diabolical hooligans”…”

Gardeners plot to keep out vandals (The Evening Argus, 19 March 1993)
“Vandal victims on the troubled Tenantry Down allotments could be in line for a security fence to protect their plots from crime. Brighton Council leader Steve Bassam backed gardeners’ calls for a 6ft fence after hearing how the plots have become a hooligan’s playground. Police think up to 400 crimes, ranging from arson to theft, have been committed on the site since December 1991…”

I’ll stand my ground on the people’s land (The Argus, 20 March 2000)
“An eco-gardener has threatened to barricade himself in his bus in a bid to stop bailiffs evicting him from his home on an allotment. Hilaire Purbrick, 36, was ordered by Brighton County Court to take his bus and leave Whitehawk Hill allotment site where he has lived for the past seven years. But the gardener is refusing to budge from the bus where he lives and tends the land with partner Mary Holmes, their four children, his chickens and dog Basil…Mr Purbrick was a founder member of WHAGA, Whitehawk Hill Allotments and Gardens Association, a co-operative which turned 15 abandoned allotments into a fertile garden. Each year the members harvested bumper crops until they were evicted last year. Brighton and Hove council said the co-operative flouted rules by keeping chickens and bees, holding late-night parties and even threatening neighbouring tenants…”

Residents protest at railway home move (The Argus, 11 April 2000)
“More than 100 people blocked a road to protest against plans to build homes on a railway allotment site. They then formed a human chain along the fence of the threatened site in Highcroft Villas, Brighton, yesterday. The protesters…presented a petition with 1,134 names to Brighton Pavilion MP David Lepper. He will hand it personally to House of Commons Speaker Betty Boothroyd at the first possible opportunity. Rail Property has been refused permission by Brighton and Hove Council to build a three-storey block of flats on the site. It has appealed and a public enquiry will be held…” [Rail Property won their appeal case at public enquiry, May 2000]

Savers sow the seeds of recovery (The Argus, 8 Feb 2002)
“A seedy day in Brighton could be the start of a movement to save the nation’s vegetables. The city is hosting one of the first community seed swaps in the country…The aim of the event, dubbed Seedy Saturday, is to safeguard rare and threatened varieties for future generations…The event takes place at George’s Hall, St George’s Road, Kemp Town…”

An introduction and history (5)