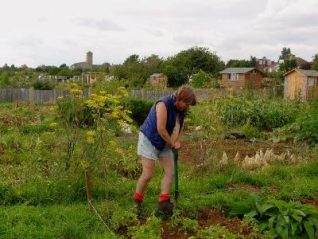 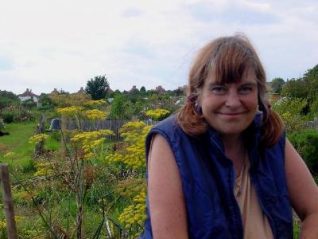 Ruth Urbanowicz was the joint winner of Brighton & Hove City Council’s ‘Best Organic Gardener’ prize in 2005. Ruth lives off the Lewes Road and has lived in Brighton for 28 years. Ruth is involved in the Brighton and Hove Organic Gardening Group (BHOGG), who have two plots at the Weald Avenue site in Hove. Ruth also has her own plots at Roedale Valley.

Ruth’s Roedale plot
“I have been there for fourteen years and I’ve actually got four plots all next to each others, so it’s quite a large area. It’s on a really steep slope, and I have a friend who started with me who’s a builder, and terraced it for me, and rabbit-proofed it and everything. I started off because I didn’t have any garden at home. Now I like the fact that I’ve got my own little place in the country away from home, and I think that gardening is just a really necessary thing for me to do.”

A family tradition
“I think the gardening thing is probably genetic for some people. I come from a long line of gardening families on both my mum’s side and my dad’s side, and all our uncles and aunts, and cousins and things, all seem to have gardening in their blood. I think I just need to be out of doors, with the elements, with the seasons, growing stuff, rooted into the natural cycles of things. Obviously it’s great to grow my own food. It just feels like a much more grass roots way of life, and I think urban life is in danger of becoming very removed from that. I like living in town, because there’s loads of stuff going on that I really enjoy, but I think the fact that I almost have a rural life as well, like people have done for thousands of years. They’ve grown their own plot, their own little patch of land, produced their own food, and it just makes me feel part of that history and part of the land, and I like that connection.”

And the roots of Ruth’s belief in organic methods
“I’ve always been quite passionate about organic issues. I studied ecology as a student back in the 1960s and realised that there were all kinds of poisons going into the environment. I was really startled that DDT wasn’t banned until 1986, and Lindane wasn’t banned until 2002, and I knew in 1968 that they needed to be banned. So, what worries me about non-organic gardening and agricultural methods is that we don’t know what’s going to be found out about the chemicals still in use. In ten years it may turn out that vast quantities of the stuff that is still quite commonly used chemically, is actually really dangerous to health. I think it is important that there is a lot of diversity in an environment. A diverse environment is a healthy and a properly functioning environment, and therefore my approach to an allotment isn’t lots of straight lines of separated out vegetables. I tend to grow carrots and onions next to each other. I like to have quite a mixed sort of planting; lots of flowers to attract beneficial insects, because their larvae will eat the aphids.”

Times are a changing
“It’s fourteen years since I first started there [at Roedale Valley]. It’s interesting ’cause the chap who’s really near to me – and he’s been there for donkey’s years – he used to really pooh-pooh the organic stuff and I was having a chat to him the other day and he said: “I’m coming round to it, I’m hardly ever using and sprays or chemical fertilisers, now” and I see him putting his own homemade compost on the beds. So I think more and more even of the old school are switching over to the organic use. There’s even an organically acceptable slug pellet that’s just come on the market, which is fantastic, because that was often the last sticking point for people. Because slugs and snails are an absolute bugger, and they will raise everything to the ground overnight quite often, and it’s completely dispiriting, and it is effective, it’s rainproof and everything.”

“I think that there’s a lot more women doing it now. There’s a lot more people with young families, so I think it’s really important that we start to shift away from old-fashioned ‘Dig for Victory‘ type, where everything’s all you know neatly laid out. So that it’s perfectly acceptable to have swings and climbing frames and stuff like that you know, and area where the kids can enjoy themselves while Mum and Dad get on and do the gardening work. I think that overall more of the allotments are being used now. Although, it’s become terribly trendy, and people think: “Oh yeah, I’ll go and do that” and they don’t realise it is actually really hard work and it does take persistent input.”

Colourful Ideas
“I like a lot of colour in my plots, like I just saw over there, there’s a chap who’s got a nice row of rainbow chard which is one of my favourite things. A lot of people are really creative, I have only recently started coming to this site [Weald Avenue], and this is very different because it’s flat, and you can see easily into people’s plots and some people have got a delightful way of doing things and you get ideas and inspiration from other people. I was growing purple climbing French beans up sunflowers and a couple of people said [at the Roedale Valley Open Day]: “that’s something I’ll try in the future”, because it looks nice. It’s getting a visual experience.”

The future of organic allotmenteering
“If you look back ten years it was almost impossible to find anything organic anywhere unless you went to Infinity Foods. And now you can get almost everything you need off the supermarket shelves, there’s more and more of a demand for organically grown food. People are becoming much more aware about where their food’s come from, maybe not everybody, but a growing number of people. I think a growing number of people are thinking: “yes actually, I would like to grow my own food”. In an ordinary town garden it’s just not possible. I think allotments have always had an important place and that remains. I’m hoping that more and more people will start to grow their own food.”