You are here: HomenextTopicsnextArchitecturenextHarvey's Cross 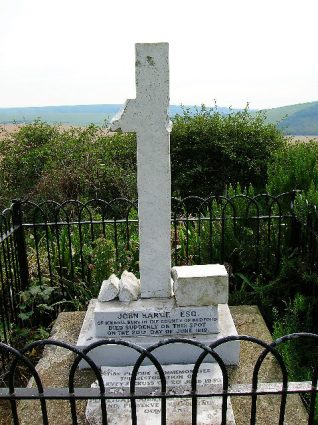 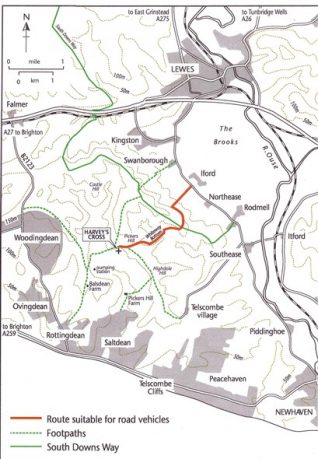 High up on the The Downs, approximately one and a half miles north of  Saltdean, in the vicinity of the long lost hamlet of Balsdean, stands a stone monument. It was placed there in 1873 by the wealthy family of Colonel John Harvey of the 9th Lancers. Harvey was a well to do military gentleman; who as local lore suggests, died tragically as the result of a riding accident on June 20 1819. Colonel Harvey, a family man who had friends in Rottingdean, was 48 years of age when he died. Ironically, he had travelled from his home in Ickwell, Bedfordshire, for his health, and was staying with the vicar, Dr Thomas Redman Hooker(1792-1838).

The ravages of time

For many decades due mainly to the ravages of time, and its remote location ‘Harvey’s Cross’ as it became known, fell into disrepair. During WWII much of the surrounding area was used as target practice; it is believed that the Cross was all but destroyed by Canadian soldiers billeted in Rottingdean and Saltdean. During the 1990s, local historian Douglas d`Enno and John Harvey`s descendants, helped to raise £4,000 to restore the monument; a small curved stone seat donated by ‘Rottingdean Windmill Walks’,was added. The restored cross was unveiled in 1999 by the Lord Lieutenant of Sussex, Admiral Linsday Bryson.

Sadly since then, the monument has become the victim of mindless vandalism. It is hard to understand, as there is virtually no vehicle access, why anyone would go to all the trouble of carrying a heavy hammer a mile and a half to smash up an historical monument that has no meaning to them. On Sunday June 29th 2014 a dozen or more long time Saltdean and Rottingdean residents,and people from further afield, who were previously involved with the Cross, walked up to the site armed with gloves, tools and cleaning materials.

The severely vandalized memorial was given a thorough clean, and the surrounding scrub cleared. A picnic lunch was enjoyed on a lovely warm sunny day, and time was spent catching up with local gossip.The views from  ‘Harvey’s Cross‘  and of the undulating gorse-down can only be described as stunning, commanding a panoramic seaward view of Saltdean and the distant English Channel. Many thanks to Douglas d`Enno for organizing this event. 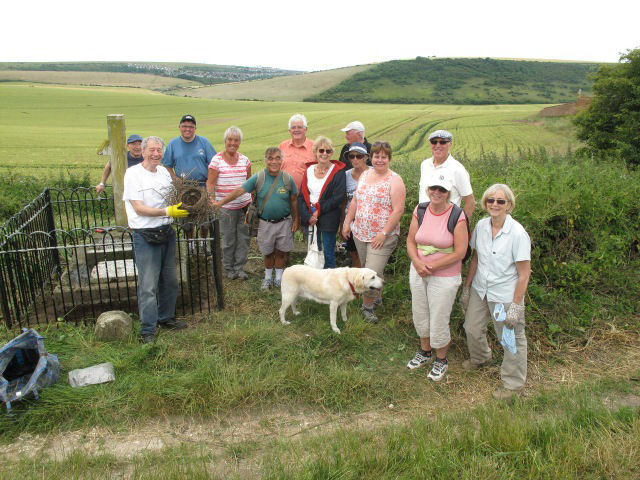