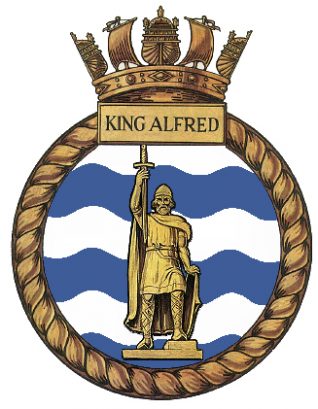 At the outbreak of the Second World War on September 3rd 1939 Hove Marina, Hove’s new municipal swimming baths and recreation complex, was due to be partially open to the public. The site was immediately requisitioned by the Admiralty under the Naval Mobilisation Act of 1938, and the Marina opened its doors for the first time on September 11th as HMS King Alfred, a commissioned ship in the Royal Navy, under the command of Captain John Noel Pelly CBE, RN (Ret).

The new establishment trained HO (Hostilities Only) officers commissioned into the Royal Naval Volunteer Reserve on temporary appointments; they were to be released from service on the cessation of hostilities. By the end of WW2 RNVR officers accounted for over 80% of the officers on active service with the Royal Navy.

Assigning rooms
Assisted by ratings from the nearby Sussex Division RNVR depot the task of clearing builder’s rubble and converting various rooms into classrooms and offices was undertaken. The 480-car underground car park which was part of the Marina was converted into several different ‘parts of the ship’, including the officers’ mess, trainee accommodation and a ship handling simulator. The main swimming bath became the main instructional hall; this bath had been designed with a removable floor which when put in place over the pool created just over 10,000 square feet of floor space. The second largest room with 4,000 square feet of floor space was a restaurant and dance hall on the west side of the building, this became the Wardroom. Small rooms facing the Kingsway, which were intended to house individual baths, were converted into offices; classroom space was provided by the dressing rooms adjoining the pools. A smaller cleansing pool was allocated for the use of the ship’s chaplain, and by 1940 this room had been converted into St Nicholas’ Naval chapel. 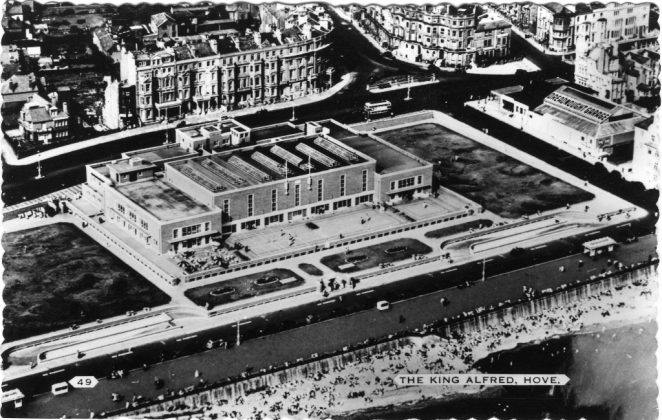 Aerial view of the Hove Marina: Note the entrances to the underground car parking garage along the south road, also the tennis courts and patio areas on the rear of the building, The grassed areas either side conceal underground bowling facilities; on the left Ten Pin Bowling alleys, on the right Lawn Green Bowling lanes. 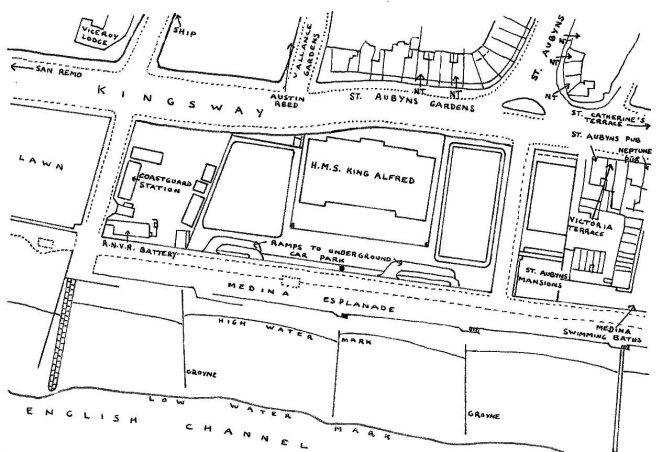 Many local hotels and private houses were pressed into service as accommodation for staff and trainees, these included Langfords Hotel in Third Avenue, and the Lawns Hotel on the Kingsway. Accommodation for WRNS personnel (colloquially known as Wrens) was set up in two large houses at San Remo, on the Kingsway. The ‘Wrennery’ as it was known in naval parlance initially housed 8 Wrens but by the end of the war it was home to 70, 45 of them worked at Lancing and 7 at Mowden.

First arrivals – early training
The first trainees reported to King Alfred in late September 1939, a mixture of Royal Naval Volunteer (Supplementary) Reservists and direct entry recruits. Many of the 2,000 strong RNV(S)R were mature, experienced civilian sailors who were fast tracked through King Alfred with an average stay of 10 days before being commissioned; the standard training period was 3 months. The first four classes of ‘Officers under training’ began instruction in early October, each class comprising of thirty men; two classes of midshipmen and two of sub-lieutenants. Rank was determined by age – those under 19½ became a midshipman, those over 19½ a sub-lieutenant. Upon receiving their commissions the new officers received their badges of rank, midshipmen wore a maroon lapel flash while sub-lieutenants wore a single ‘wavy’ gold stripe on their jacket cuffs; this, and wavy white tape on the RNVR ratings seamen’s jersey collar earned the RNVR he nickname ‘the wavy navy’. 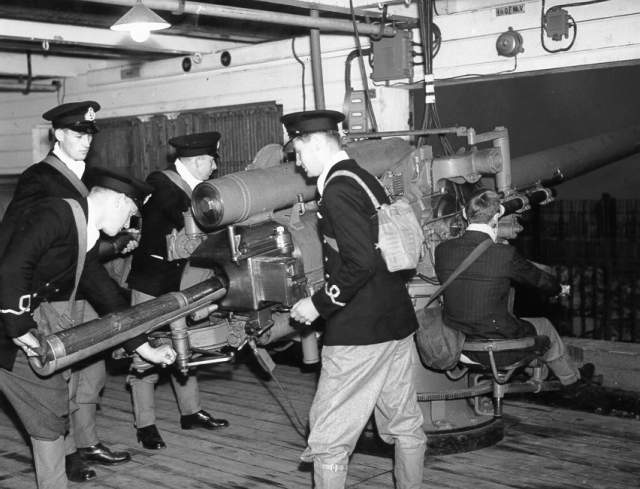 Officers under training practice gunnery drill at Hove Battery. These Sub Lieutenants RNVR were amongst the first to pass through HMS King Alfred. Note the man on the elevation operator’s seat has not yet acquired a uniform but is wearing a pin-striped jacket.

Once the RNV(S)R had all passed through HMS King Alfred the establishment trained direct entrant officers, CW Scheme and the ‘Y’ Scheme Rating Cadets. Direct entrants were ‘mature’ gentleman aged around thirty who joined as ‘officers under training’, receiving their commissions on call up. CW (Commission and Warrant) candidates were specially selected men from the lower deck, serving ratings with a minimum of 3 months’ sea experience assessed as having officer potential. The ‘Y’ scheme recruited educationally qualified young men whilst still at school who showed ‘officer potential’. Upon call up they completed basic new entrant training as naval ratings before joining King Alfred. CW and ‘Y’ scheme Cadet Ratings comprised the majority of the trainees to pass through HMS King Alfred; they were not afforded the title ‘officers under training’ until the final two weeks of the 12 week course.

An intake of ‘CW’ candiates pose with thier class instructors at ‘King Alfred’ – Square rig was worn until the end of the course, a white band on thier caps indicated thier status a officer candiates.