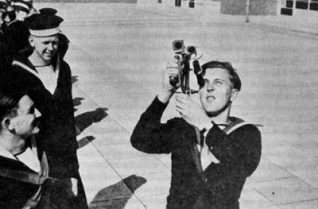 Cadet ratings learning how to use a Sextant during instruction at the main ‘King Alfred’ site. 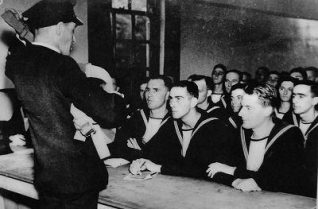 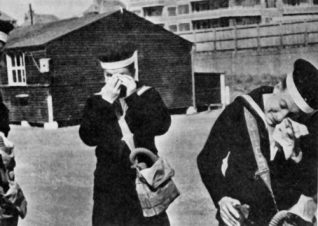 Mowden
Initially an annex for the main site as the numbers of men arriving increased. In the summer of 1941 it became the new home of the Admiralty Selection Board, previously held at the RN Barracks, Portsmouth. From July 8th 1941 it became the reception centre for all CW candidates. There was no accommodation at Mowden, cadet ratings were billeted in small hotels and private homes in the local area.

Ratings underwent a medical before attending the Admiralty Selection Board in the school library. CW Ratings arrived at King Alfred wearing their seaman’s ‘square rig’ uniform, Those who passed the Board were issued with two white cap bands to be worn in place of the normal ‘HMS’ cap tally and became ‘cadet ratings’. A playing field served as the parade ground with a mast from which the White Ensign and various signal flags were flown; morning divisions were held there in all weathers. Cadet Ratings were expected to achieve a high level of ‘OLQs’ (officer like qualities), the qualities and behaviour expected of an officer and a gentleman, any displays of LDA (lower deck attitude) could result in a candidate being failed and returned to his unit at any point in the course.

Cadet Ratings were organised into ‘Divisions’ at Mowden, groups of around 100 men, named for famous naval figures, such as Anson, Drake, and Nelson, which they remained with throughout their time at King Alfred. Cadet ratings stayed at Mowden for 2 weeks before moving with their Division to the next stage of the course. From January 1941 this was at Lancing College.

Lancing
Training commenced at Lancing from mid January 1941, under the care of Commander Hugh MacLean, Officer in Charge of King Alfred (L) . The Cadet ratings were accommodated in large communal dormitories at the College during this phase of their course, morning Divisions being held in the Tower Quad. Navigation and signalling training at Lancing employed a technique and technology used by the Fleet Air Arm to train Air Direction Officers in the use of vectors – the Wall’s Ice-cream tricycle. The trainee had to peddle around a set course following bearings using a compass mounted on the box at the front of the machine. Lancing trainees had to obey the ‘rules of the road’ of seamanship and be conversant in signalling using flags which they attached to a small mast on the front. The cricket pitch was used for this activity. The first Division of Cadet ratings to pass out from King Alfred (L) did so on February 27th at a parade witnessed by Rear-Admiral Harrison.

On May 29th 1941 His Majesty King George VI visited and is known to have inspected the Lancing and Hove Marina sites. While at Lancing he inspected several Divisions of Cadet Ratings on the Tower Quad. In August 1942 HMS King Alfred (L) provided a staging point for Canadian troops participating in operation ‘Jubilee’, the ill-fated allied raid on the port of Dieppe. [See HMS Lizard for more detail]

At the completion of their six weeks at Lancing the entire division transferred to the main site at Hove for the final stage of their training.

Hove
The final four weeks of training were done in the main building, the RNVR Drill hall in Victoria Terrace and at Shoreham harbour. Accommodation for Cadet Ratings was the dormitories in the converted underground car park. Direct entry officers were billeted ‘ashore’ in hotels and private houses

One of the first tasks upon arrival at Hove was being measured for an officer’s uniform; the area around the establishment had attracted a number of naval outfitters and at least five had opened a stone’s throw from the main entrance.

Captain Pelly and the senior staff officers pose with newly passed out class of RNVR officers outside the main building of ‘King Alfred’.

Having achieved the required marks to complete the course and passed their Final Board, Cadet Ratings received their Commissions at a final parade in the main hall attended by a senior officer, usually an Admiral. From Hove the new Acting Temporary Probationary Sub-Lieutenants in the R.N.V.R. went to the Royal Naval College at Greenwich.