You are here: HomenextTopicsnextArmed ForcesnextRoyal Navy: 1939-1945nextHMS King Alfred: Part 3 - 1945 and the end of the war 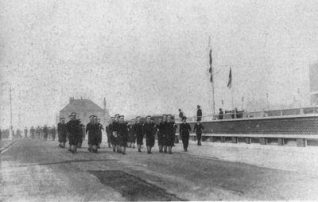 zoom
Cadet Ratings march past the Quarterdeck on the South Road behind Hove Marina; these men were in the final stage of their training before being granted a commission.
From a private collection 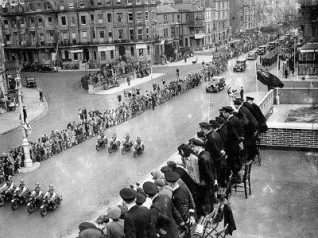 zoom
The outriders at the head of the Victory Parade through Hove pass the front of HMS King Alfred in May 1945. Officers and guests gather to watch the parade from the roof of Hove Marina.
Image and caption reproduced with kind permission from Brighton and Hove in Pictures by Brighton and Hove City Council 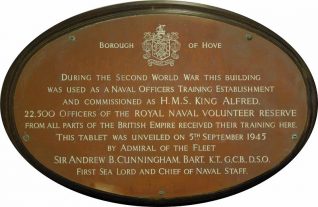 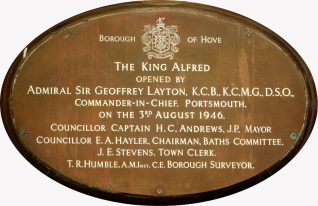 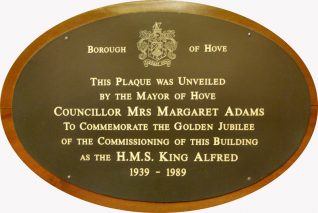 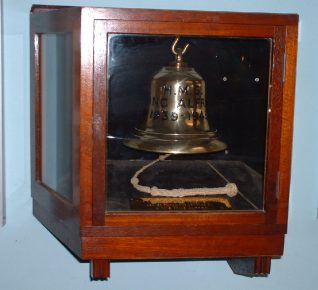 zoom
Photo: Tony Drury by kind permission of Brighton & Hove Council
Replica of the Ship's Bell - this is on display in the King Alfred Leisure Centre.

The personnel and trainees of King Alfred celebrated VE Day (Victory in Europe Day, May 5th 1945) in Hove and marched through the town in the Victory Parade; the WRNS led the naval contingent. By the end of this month a scaling down of operations at King Alfred was begun as the numbers of officers required for sea duty became greatly reduced.

A sudden death
On the morning of June 6th 1945 Captain Pelly died suddenly aged 57 whilst on duty at HMS King Alfred (H); he was given a full military funeral service at the main building on Hove seafront attended by senior officers from the Army, Navy and Air Force establishments in the area. The coffin was carried on a gun carriage along the Kingsway to the former Hove Marina followed by the funeral procession made up of contingents from the WRNS, King Alfred staff and Cadet Ratings. After the service the coffin was taken to All Saints Church, Witham in Essex to be buried.

Closing down after VJ day
Captain Cuthbert Coppinger DSC arrived on June 21st to assume command. He was to continue the scaling down of training at HMS King Alfred; numbers were further reduced after VJ Day (Victory over Japan Day, August 14th 1945). Mowden School was the first annex to close, training ceased there in October when the last Division left for Lancing. When this Division left Lancing for Hove in December, training ceased and clean up operations began in preparations for its return to civilian control. The final handing out of commissions at King Alfred took place in late December 1945.

Over the six years of war, HMS King Alfred trained a total of 22,508 RNVR officers for active sea service, these were men from a variety of commonwealth and allied nations including Australia, Belgium, Canada, China, Holland, New Zealand, Norway, South Africa, and the United States.

On January 7th 1946 HMS King Alfred moved to Exburv House near Southampton; the site at Hove Marina was known as HMS King Alfred II during its clean up and demilitarisation period, finally closing in June 1946.

When it reopened to the public in August 1946 Hove Marina was renamed ‘The King Alfred Leisure Centre’. A commemorative plaque mounted on the wall in the main entrance hall of the building read as follows:

‘During the Second World War this building was used as a Naval Officers’ Training Establishment and commissioned as HMS King Alfred. 22,500 Officers of the Royal Naval Volunteer Reserve from all parts of the British Empire received their training here.
This tablet was unveiled on 5 September 1945 by Admiral of the Fleet Sir Andrew B. Cunningham, Bart KT GCB DSO First Sea Lord and Chief of Naval Staff. ‘

The plaque, and two others which commemorate the reopening of the centre and the Golden Jubilee of the commissioning of Hove Marina as the Royal Navy’s Officer Training Establishment H.M.S. King Alfred in 1939, have since been removed when the building underwent remodelling, they are currently not on public display.

The name lives on
HMS King Alfred finally closed in August 1946 when Exbury House was renamed HMS Hawke. The name King Alfred was reused in 1994 when a new Royal Naval Reserve training centre opened at Whale Island in Portsmouth designed to take over the training roles of Brighton and Hove’s last commissioned naval establishment, HMS Sussex, and Southampton’s HMS Wessex which were both closed in 1994.

The name King Alfred was also adopted by the Hove & Aldur Sea Cadet unit which became the T.S. (Training Ship) King Alfred. This unit has enjoyed a long association with the Royal Navy in Hove, sharing accommodation with the Sussex Division RNVR/RNR from 1946.

A more detailed version of this history is to be found at www.royalnavyresearcharchive.org.uk/

Sources
‘The King Alfred Papers’: a collection of letters and research material held at the Hove branch of Brighton & Hove City Libraries.