You are here: HomenextTopicsnextArmed ForcesnextRoyal NavynextThe RN in Brighton & Hove 1798 to the present day, an overview

The RN in Brighton & Hove 1798 to the present day, an overview 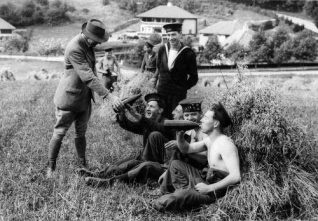 zoom
Sailors from a nearby naval training establishment helping out with the harvest pictured with Colonel Percy Filkins in the Vale, Ovingdean during WW2.
From the private collection of Mrs Dulcie Carnaghan 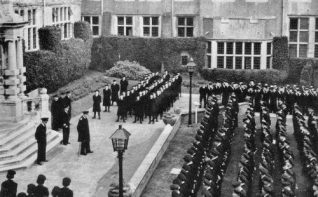 There have been a number of Royal Navy units associated with the Brighton and Hove area, the earliest appeared at the turn of the nineteenth century; at the beginning of the twenty-first century there is still one active unit.

1798 – 1892
The first Royal Naval unit to appear in the area was a company of the Sea Fencible Force, a local defence force raised to protect against a French invasion.  Not needed after the battle of Trafalgar they islanded in 1810.

The need for local defence was again raised in 1853 when the Royal Naval Coast Volunteers were formed to protect Britain’s coastline. The men of this force could be used to fight at sea under certain conditions but were never called in to active service, disbanding in 1873.

In 1859 the Royal Naval Reserve came into being; a company was raised in Brighton, under the control of the RNR Sussex Headquarters in Newhaven, In 11877 a dedicated RNR Battery was opened in Hove to train the men in naval artillery. As its name suggests, this was a gun emplacement pointing out into the English Channel used to give gunnery instruction to RNR officers and ratings.    The RNR still exists today but has no presence in the city; the Battery was closed in 1968

One year after the Royal Naval Coast Volunteers disbanded a new volunteer force was to be established in Brighton, when a company of the Sussex brigade of the Royal Naval Artillery Volunteers (R.N.A.V.) was formed in 1874. This was the first naval force to recruit and train volunteers from all walks of life in naval gunnery and drill. They co-existed with the RNR using the RNR Battery at Hove for training. The R.N.A.V. was short lived however and was disbanded in 1892.

1903 to 1939
Shortly after the turn of the twentieth century another RN unit was to make its appearance when the Brighton and Hove Company of the new Royal Naval Volunteer Reserve was formed in 1903.  By 1909 this and other companies at Newhaven, Hastings, Bexhill and Eastbourne formed the Sussex Division of the RNVR, with their headquarters at 5 Victoria Terrace in Hove. This unit also used the RNR Battery on Kingsway;
The RNVR was mobilised in 1914 on the outbreak of World War I, however the majority of the officers and men did not join the fleet, instead they were to fight as soldiers. The eight RNVR divisions in the UK were divided into 2 Brigades to fight on land as the Royal Naval Division; the men of the RNVR would see action on the western front and at Gallipoli, 47,900 of them were to become casualties. This effectively decimated the RNVR as a reserve force and it was to be 1921 before the government had formulated a new plan to provide reserve forces for the fleet. The RNVR was reconstituted in that year; the Sussex Division was re-established at 5 Victoria Terrace in 1922. The RNVR was again mobilised for war in September 1039.

1939 – 1945
With the outbreak of World War II on September 3rd 1939 the RNVR was again mobilised and several buildings in Brighton and Hove were immediately requisitioned for use by the Admiralty, including the newly built (but not yet opened) Hove Marina complex. This building and the adjacent RNR Battery, was commissioned as His Majesty’s Ship King Alfred, on September 11th as an RNVR officer training establishment, the first of four naval units to operate in the area during WW2. The Sussex RNVR Division was fully mobilised by the end of October 1939, its officers and men being absorbed into the fleet and the Division effectively ceased to exist.

In May 1941 RoedeanSchool for Girls was requisitioned to house the navy’s Torpedo and Mine training school, HMS Vernon, which was evacuated from the bombing in Portsmouth.  April 1942 saw the opening of the RN W/T Training School in Queen’s Road and West House, this was followed in July 1942 by a Combined Operations Landing Craft base, HMS Lizard, which was opened at AldringtonBasin to act as training and re-supply depot for Royal Navy and Royal Marine landing craft flotillas.

Expansion
As the Second World War progressed the establishments expanded into other buildings and sites around the area – as far out as Lancing College which became a part of HMS  King Alfred in 1942, and Rottingdean where accommodation was acquired in for Senior NCOs from HMS Vernon.  Numerous hotels, rest homes and private houses were requisitioned by the Admiralty for the accommodation and training of naval personnel. Many local businesses came to rely on business from the naval bases for their livelihoods. In the case of King Alfred a number of Naval Outfitters opened in the vicinity to cater for the officers passing out from training, many of whom were in need of a new uniform.

The war’s end
By the time it ceased operations in Hove on January 7th 1946 HMS King Alfred had trained 22,508 Officers, who were to form the backbone of the Royal Navy’s sea going officer strength. HMS Vernon at Roedean had seen over 6000 officers and men, including over 1200 WRNS personnel, attend training courses in torpedo and mine warfare. While neither of these two establishments had any direct participation in operational activities, HMS Lizard was directly involved in providing logistic support for operation ‘JUBILEE’ – the ill fated allied raid on the port of Dieppe on August 19th 1942, as well as operation ‘NEPTUNE’ the build up of forces for, the D-Day landings in Normandy on June 6th 1944, operation ‘OVERLORD’.

HMS Vernon was withdrawn to Portsmouth by the end of July 1945 and Roedean was reopened as a girls’ school in January 1946.  HMS Lizard was no longer needed as a landing craft depot after the end of hostilities in Europe and was wound down to close on New Year’s Eve 1945. HMS King Alfred moved its operations to Exbury, Hampshire in January 1946, the main building which they had occupied reverted to being Hove Marina in June 1946 and was renamed the King Alfred Leisure Centre.  The fate of the RN W/T (Wireless/Telegraphy) Training School in Queen’s Road is not clear.

1946 – 2007
On October 1st 1946 the newly re-constituted post-war Sussex Division RNVR returned to the RNR Battery, Hove. The unit was commissioned as HMS Sussex on April 28th 1951, before transferring to a new site at Maxwell’s Wharf, Shoreham in 1968 at which the Battery was closed.

In the summer of 1990 the Sussex University Royal Naval Unit (URNU) was formed, initially this unit lodged at HMS Sussex before moving into offices at the university’s Falmer campus in 1992. It is one of 14 such units located on or near university campuses around the UK. HMS Sussex was closed as part of defence spending cuts in March of 1994.  The Sussex URNU is currently the only naval presence in either East or West Sussex.

Dingwall & Bailey (1977) Sussex (Sunday Sailors) by the Sea, the History of the Royal Naval Reserve in Sussex: 1874-1974, Private publication