You are here: HomenextTopicsnextBathingnextDr Russell: a pivotal influence 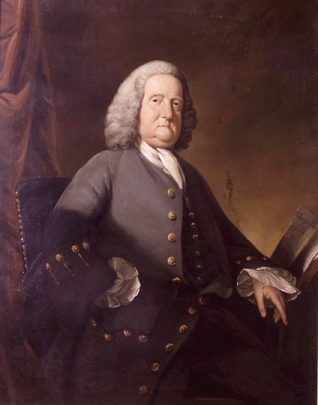 zoom
Dr Richard Russell, FRS By Benjamin Wilsonc1755. This is a portrait of Dr Richard Russell who made Brighton famous in the seventeenth century with his 'seawater cure'; this included bathing in the sea for medicinal purposes and drinking pints of seawater in prescribed doses. In this picture Russell sits in half right profile, he wears a grey wig, a grey coat with gold buttons and white cuffs. He has a book open next to his left hand.

zoom
This engraving shows the bathing place at Brighthelmstone with wealthy people descending stars cut into the cliff. They would then enter bathing machines, from which they could be bathed or dipped by characters such as John "Smoaker" Miles or Martha Gunn. On the right, members of the village's fishing community sit in or beside boats, repairing fishing nets. A windmill can be seen the top of the cliff. This engraving is reputedly by Rowlandson, a satirical cartoonist of the time.
Image reproduced with kind permission from Brighton and Hove in Pictures by Brighton and Hove City Council

a) HISTORY: Sea-bathing was a popular recreation long before the establishment of the resort function at mid-eighteenth-century Brighton {19a}. In 1641 a certain Mary Askell is recorded as coming to Brighton for ‘the cure’, possibly by sea-bathing, but the first specific reference to bathing at Brighton was in 1736 when the Revd William Clarke of Buxted wrote in a letter of his daily practices of ‘sunning himself upon the beach’, ‘bathing in the sea’ and ‘riding out for air’. Sea-bathing was also common practice at this time in the north of the country at the spa town of Scarborough. {2}
By the 1740s, and perhaps even before, Dr Russell (q.v.) of Lewes was prescribing bathing and even the drinking of sea-water for many ailments, and the popularity of sea-bathing rapidly increased. Bathing-machines (see below) appeared on the beach by 1750, and although bathing was mixed initially, separate beaches for the sexes were later established, the ladies’ beach being just east of the Steine with the gentlemen’s to the west. In 1776 Dr Samuel Johnson bathed at Brighton, and when the Prince of Wales expressed his pleasure at the practice during his first visit in 1783 the future of sea-bathing was assured. In the early nineteenth century some doctors advocated bathing in cold water throughout the winter, but this practice did not apparently last long!
By the end of the nineteenth century bathing was extremely popular as the masses flocked to the seaside, but the sexes were still confined to designated bathing beaches and specified times. Mixed bathing, from machines only, was first sanctioned by the corporation in July 1901, and restrictions on bathing remained for many years into the 1930s {27}.
In 1807 the parish vestry prohibited bathing without a machine between Royal Crescent and the brick kilns at the Hove boundary; one John Crunden was consequently fined for bathing naked in 1809. However, nude bathing by men continued on the beaches until the introduction of mixed bathing in 1901. On 1 April 1980 a controversial naturist beach sanctioned by the council was opened at the Cliff bathing beach below Duke’s Mound, the first on a prime beach at a British resort.