Brighton’s early street directories indicate that former domestic residence and workshop space at number 12 Gloucester Road became known as the ‘Basketmakers Arms’ around 1859.  However, that is not entirely correct. For some years before this, both the pub and the street were known by different names. Gloucester Road was originally Gloucester Lane, a long road of tenement housing with a yard between numbers 12 & 14 where property number 13 should have been. 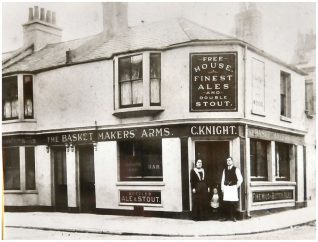 Number 12 clearly had potential for both a home and workshop. In 1852 Thomas Knight, took possession of the property from the Back family and opened a basket making business, probably employing his son Joseph and Thomas Cook, a blind basket maker from number 14. Thomas Knight also began to supplement his income by selling beer from his shop, calling the premises, ‘The Brokers Arms’. Perhaps Thomas chose such an unusual name to reflect the occupation of his close neighbour William Giles, a furniture broker.

By 1859 the premises had become better known as ‘The Basketmaker’s Arms’, but the census returns still seemed to indicate that beer sales were considered a subsidiary line to making wicker baskets and sieves, which was Thomas Knight’s main source of income. Although Thomas continued to make baskets there for over 25 years, the beer house became more popular and developed into a thriving independent business. 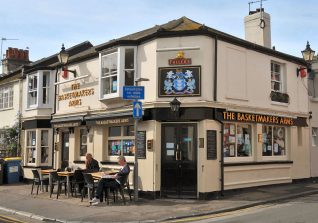 When Thomas eventually left in the mid 1870s, the Basketmakers was taken over by a Mr Boyd, who in turn passed it to Mr Harry Hall, from a local dynasty of ‘Hall’ publicans.   At last, both the census enumerator and street directories could agree, for from then on the retailing of quality beer in ‘The Basketmakers’ was recorded as its prime purpose.

Click on the image below to open original in a new window – click again to zoom in.