The ‘Sussex Dairy Co.’ appears to have been founded in the early 1880s, either by amalgamation or acquisition of a number of Sussex-based dairy companies. The name is recorded in Eastbourne  at 32 Terminus Road in 1882, and a year later Chandler’s Preston Farm Dairy, based in St. James’s Street, also joined. 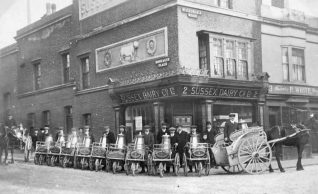 The premises photographed in 2012

Click on the photographs to open a large view in a new window.

The picture shows the premises of Alfred Gill at 1-2 St. George’s Road, a farmer of the 68 acre Bedford Dairy since the early 1850s. This remained independent until 1887, afterwards becoming part of the ‘Sussex Farms Dairy Co. Ltd’. It was Gill’s son (also named Alfred) who was to manage the Brighton branch of the company, now having offices at St. George’s Place, St. James’s Street and East Street.

By the mid 1920’s the company had been subsumed into the London-based Belgravia Dairy and by the 1950s was again taken over by the South Coast Dairy Company. The premises remained as a milk distribution depot until the 1960s, after which time it was used by various commercial outlets, including a wallpaper warehouse.

1897 advert for the Sussex Dairy