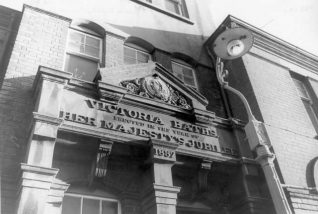 b) NINETEENTH-CENTURY CHARITIES: Numerous charitable and voluntary institutions were established in the nineteenth century to care for those who could not afford to care for themselves, but who did not enter the workhouse. Medical help was provided by the dispensaries (see “Hospitals and Dispensaries”), lying-in institutions, and medical missionary societies. Other societies such as the Mutual Provident Society and the Dollar Society allowed poor people to invest hard-earned money, to be returned with interest when it was most needed. Co-operatives were formed to reduce the cost of food and other essentials to the poor (see “Co-operatives”). In 1829 the first soup kitchen was established at SpringGardens, and permanent soup kitchens were opened at Mighell Street and Ship Street in 1839 with several others later; they lasted well into the twentieth century. Winter warmth was also provided by the Brighton and Preston Blanket Lending Society which continued until 1940. Numerous societies also tried to improve the moral welfare of the poor, including temperance societies, the Salvation Army, and the Brighton and Hove Town Mission. ‘Model Dwellings for the Poor’ were provided by a charitable trust in Church Street (still standing) and Clarence Yard in the 1850s. Elementary education for the poor was provided by the church and a number of charitable societies (see “Schools”), while the council built public slipper baths at North Road , Cobden Road, Ditchling Road , Park Street and the Aquarium . Similar to domestic baths, the slipper baths lasted into the 1970s and enabled the poor of the town to keep themselves clean at low cost; they were also popular social meeting places. {2,3,6,7,24,115,275a}