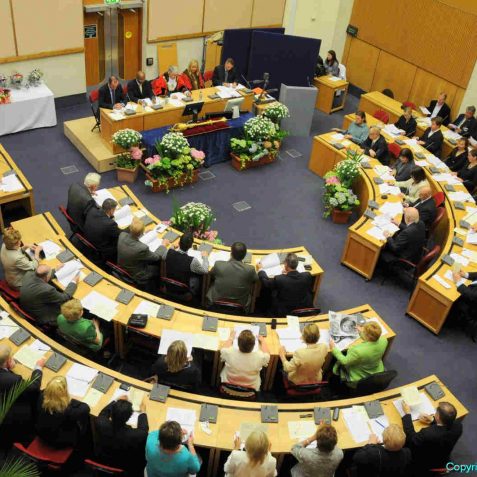 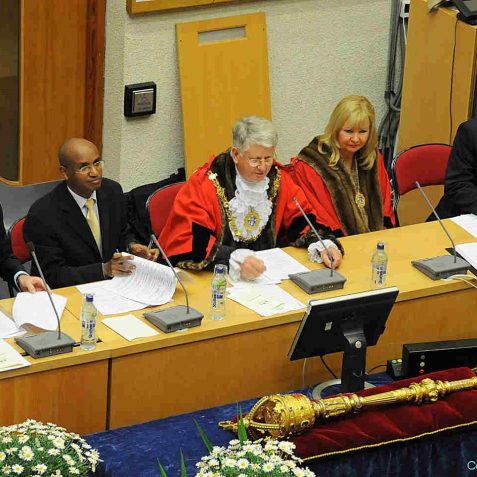 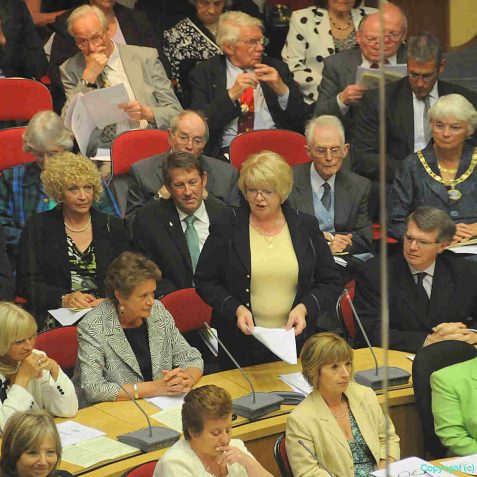 The new Mayor is proposed and seconded: standing is Councillor Mary Mears
Photo by Tony Mould 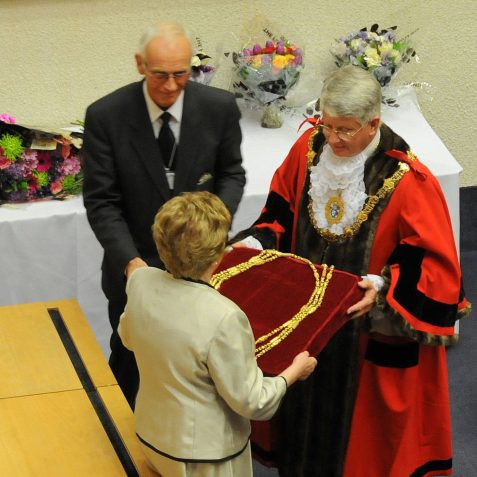 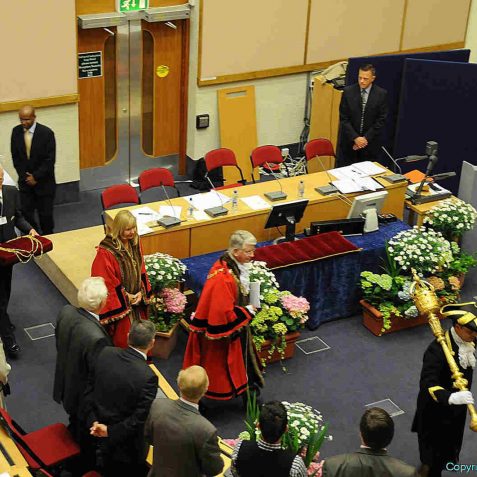 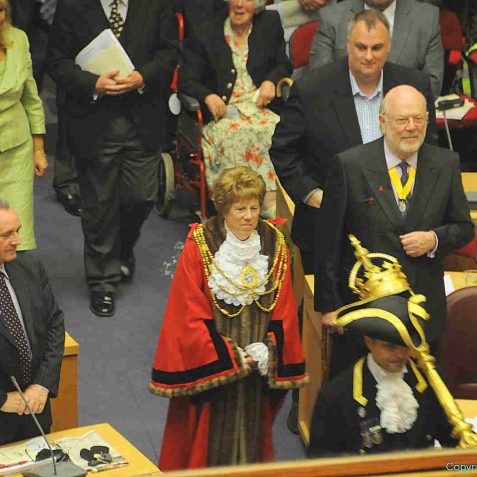 Having been dressed in the mayoral robes, The Mayor, Councillor Ann Norman re-enters the chamber 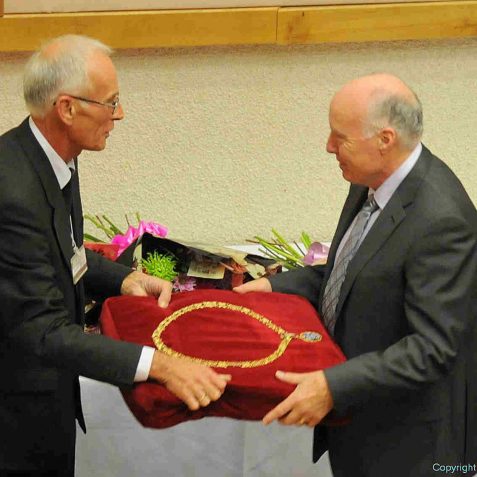 The deputy Mace Bearer presents the Mayor's Consort, Councillor Ken Norman with his chain of office 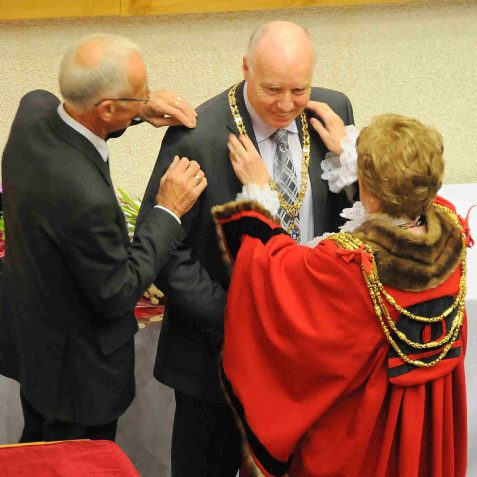 The Mayor presents her Consort, husband Ken Norman, with his chain of office
Photo by Tony Mould 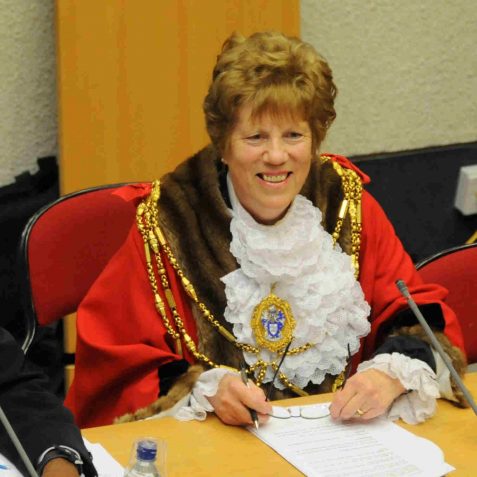 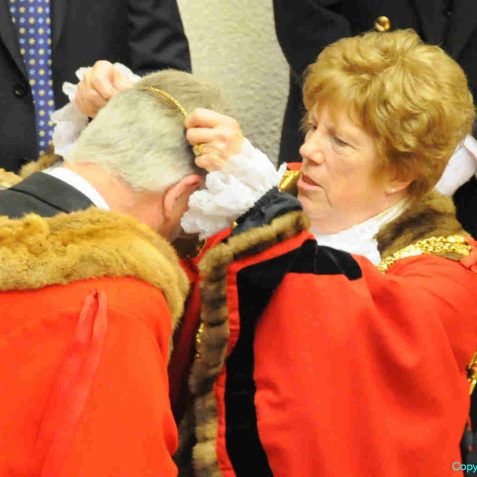 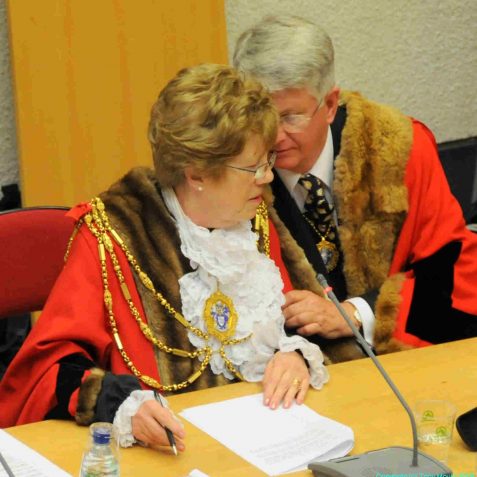 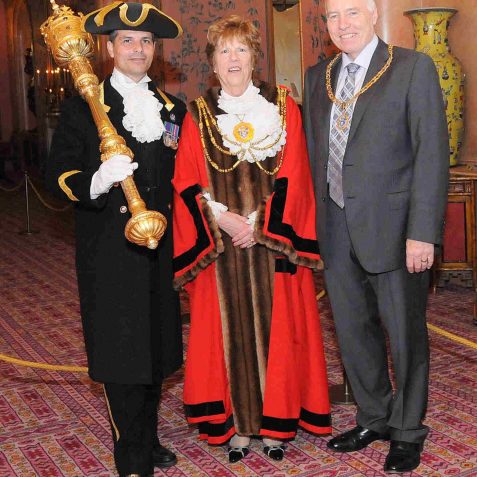 Mace Bearer Robert Robertson, and the newly appointed Mayor and Consort at the Mayor Making Reception in the Royal Pavilion
Photo by Tony Mould

The inauguration of The Mayor and Deputy Mayor of Brighton and Hove takes place every year in May; this ceremony is known as ‘The Mayor Making’.  The actual ceremony in the council chamber is off limits to press and photographers. But this year My Brighton and Hove chief photographer Tony Mould was allowed to record the ancient ceremony for the website -  a scoop for us.

History of the office
The history of the term ‘Mayor’ dates back many years (the City of London Mayoralty dates from 1192) but was more uniformly established by the Municipal Corporations Act 1835.  The Mayor is regarded as the first citizen of the Borough and the ceremonial Head of the Council, although the Mayor has few actual legal powers.

The Brighton and Hove merger
In 1993 a Local Government Commission reviewed the Local Government structure in England.  The Commission recommended that the two towns of Brighton and Hove should merge to form a Unitary Authority, independent of the County Council, which came into being on 1 April 1997.  On 15th February 2001, the Mayor received Letters Patent from the Vice Lord Lieutenant, conferring City Status on Brighton & Hove, on behalf of Her Majesty the Queen.

The ceremonial Mace
The Mace originated as a ‘weapon of war’ and is carried before the Mayor on ceremonial occasions. The Brighton Mace was purchased by private subscription in 1887 and contains a scroll listing the names of those who subscribed. The Hove Mace bears the inscription ‘CHARTER OF INCORPORATION Granted 8 August 1898’. Both Maces are still in good condition and are used alternately at formal ceremonial occasions.