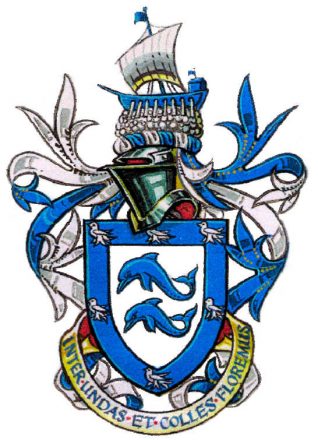 b) DEVELOPMENT of BRIGHTON CORPORATION and BOROUGH COUNCIL: The 1873 addition of part of Preston parish increased the borough council to thirteen aldermen and thirty-nine councillors, but Preston’s representation was made equal to other wards by the 1884 Brighton Improvement Act, resulting in a council of fourteen alderman and forty-two councillors. On 1 April 1889, under the 1888 Local Government Act, Brighton became a county borough with all-embracing responsibilities, completely independent of any county council. Note that the first woman councillor was a Mrs Blatch who was elected in 1918.
At the creation of ‘Greater Brighton’ in 1928, the borough was divided into nineteen wards with a council of nineteen aldermen and fifty-seven councillors. Two years later the local boards of guardians of the poor were abolished, and the county borough council had by then assumed responsibility for virtually all municipal affairs including education, libraries, police, fire-brigades, health, sewers, water, electricity, burials and public assistance. Although several of these functions were later administered by national boards, ministries or joint local boards, the county borough council continued to run the town until 1 April 1974 when Brighton, with boundaries unaltered, became one of seven district councils within the Shire County of East Sussex, under the terms of the 1972 Local Government Act, and was stripped of many of its responsibilities. A second charter came into effect on the same date to incorporate the new district as a borough with any previous privileges as a borough maintained; in effect this charter is for ceremonial purposes only, the chairman of the council being designated mayor and the council being known as a borough council. (Both the 1854 and 1974 charters may be seen in the town museum.) The 1972 Act also abolished the office of alderman, and the borough council then consisted of fifty-nine councillors only. This number was reduced to fifty-six in 1979 and to forty-eight councillors in sixteen wards in 1983.
East Sussex County Council took control of education, fire services, libraries, refuse disposal, social services and overall structure planning, but Brighton Borough Council retains responsibility for housing, planning, refuse collection, environmental health, parks and recreation, and, on an agency basis for the county council, highways. Brighton was initially represented by twenty-one county councillors, but since 1983 it has had sixteen councillors on a county council of seventy members.
{1,33-35,39,43,115,300}