You are here: HomenextTopicsnextHistorical overview of Brighton and HovenextA potted history of Brighton

A potted history of Brighton 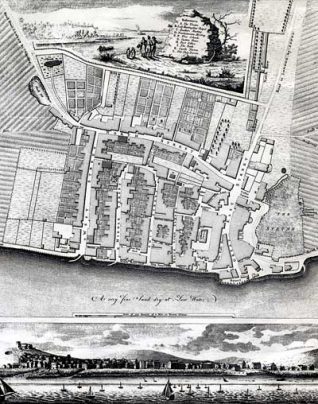 Geoffrey Mead is a local historian with an eye for the broader picture. He is also a geographer and knows that the underlying geology of an area has determines its history. Geoff has an encyclopaedic knowledge of Brighton and Hove’s rich and colourful past, and he understands the significance of wider influences on its development and culture.

The role of the Prince Regent’s love life in the growth of Brighton is well known. But the story that Brighton sprang from a little fishing village is a myth. The town has been of considerable economic importance since medieval times.

Topography
Because of its very particular topography Brighton grew up on the one point on this part of the coast that allowed for the landing and transportation of cargo inland. The Old Steine forms the bed of a freshwater stream which now runs underground into the sea. In the past the stream was surrounded by damp, low-lying ground but to the west ran a chalk ridge. Further to the east the area was bounded by high chalk cliffs. Further to the west was the low ground prone to flooding which now forms Hove; then a shore criss-crossed by creeks all the way to Shoreham. The beach at Brighton was firm with no marsh, mud flats or underwater rocks. In short, it was perfect spot for a major fishing town. And the ridge to the west of the stream was where the town was built. The Old Steine forms the bed of that stream, Ship Street was the highest point where the better-off lived and East Street the lowest for the hovels of the poor. Dyke Road is the road that runs up the ridge to the old Parish Church of St Nicholas. “If there was nothing here and Columbus arrived today”, Geoff Mead said, “Brighton would still be the best place to land”.

Fishing and Farming
Flemish immigration took place in the 13th Century and the name, Steine, may derive from the Flemish word “steen” or stone. A number of sarsen stones, no doubt of ancient ceremonial origin, have been recovered from the area.

In medieval times Brighthelmston, as it was then known, was home to both fishing and farming communities, as well as a range of trades people since the 14th Century. Smuggling, piracy, privateering and “wrecking” (unloading the cargo from ships swept or lured onto the rocks) were also profitable local industries. A special type of vessel called a “hog-boat” was developed which had a number of unique features, including a very wide beam for extra stability in rough seas, and a shallow draught that could more readily be hauled onto the beach. This marine innovation contributed to the prosperity of the local fishing industry.

But the “Little Ice Age” of the late 17th century was followed by severe coastal erosion and catastrophic storms in the early 18th Century. The fishing community lived on the foreshore in front of the cliff but this remaining part of the original Brighthelmston was swallowed by the sea. These natural disasters brought Brighton to its knees and the town went into an economically downward spiral.

Sea Water Spa
After its near destruction by the sea it was the curative powers of sea water that brought about its recovery. In 1750 a Lewes doctor, Richard Russell, published a book on the subject and built Russell House on the south side of the Old Steine to accommodate patients. The employment this generated led to the town becoming prosperous and later in the century “bathing machines” appeared on the beaches. Property speculation ran rife as properties were built to accommodate visitors to the sea water spa and the location for that popular outdoor activity – promenading. The Old Steine had always been common land used for drying nets and hauling up boats during storms. Little black pigs wandered around it scavenging. Now promenaders complained about tripping over nets.

Fashionable Royal Resort
The discovery of the town by George, Prince of Wales, led to him building his seaside residence on the Old Steine. We now know it as the Royal Pavilion. The Western Lawn of the Pavilion offered attractions, such as firework displays, concerts, illuminations and donkey racing. The Old Steine with its new buildings, shops and lodging houses, became the focus of well-to-do and fashionable Brighton. The Pavilion, like all the other buildings on the Steine faced away from the town itself. Inevitably; first wooden, then iron railings were erected around the central grass area to complete the enclosure and the fishermen after much protest lost their common lands rights.

Cosmopolitan Industrial Town
Brighton was not just a fishing town supplying a local market. Records show that Brighton was home to a number of shipwrights and ships carpenters; and the nature of the beach and foreshore boosted the passenger and cargo trade of the 18th and early 19th Centuries. Brighton vessels carried cargo to and from the Thames, the Medway and all along the South Coast and brought coal from the north-east coast. Brighton was listed as an important shipyard alongside Portsmouth, Plymouth and Southampton. So sailing crews from coastal ports were regular visitors. Brighton exported dried fish from the Mediterranean and timber from the Baltic and North America. As a focus for international as well as local trade, Brighton has always been home to an international community. Sailors came from all over the world: French, Russians, Latvians, French and Anglo Canadians, Poles, Norwegians, Blacks and French Cajuns from Louisiana and Alabama. They all mixed and mingled in the town.

Leisure City
Because of its history and geography Brighton and Hove has a very distinct culture. It is a university town and with a reputation for being radical – the first Labour MP in Sussex was elected in Brighton. It has a large gay and lesbian community and a significant Black history. It is accepting of holiday makers and day trippers, visitors and newcomers. It is now regarded nationally as a major leisure city. Geoff Mead thinks that fish is the key: the moon not the sun. Fishing rather than agriculture has been the major influence. Fishing involves 24 hour working not the dawn to dusk life of farmers. Fishing may have waned, but it hasn’t vanished. It is still part of the amazing mix that is Brighton and Hove.