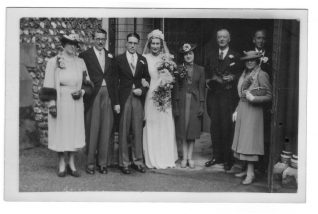 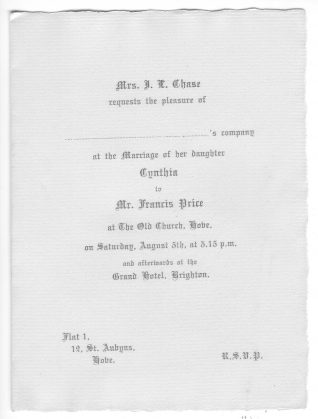 zoom
Printed invitation for the wedding of Francis Price and Cynthia Chase, 5th August 1939
Contributed to the Letter in the Attic by Anne Morrison

Francis and Cynthia were married on 5th August 1939 at the Old Church (St Andrew’s) in Hove with a reception at the Grand Hotel, Brighton.

In 1982 Francis wrote a memoir covering the years from birth until 1952.  Below, he describes the lodgings he found in Regency Square.

The sound of the sea was beautiful

“It was an old Regency building and had the elegance of that age. …  I had the very top attic-type room which overlooked the square and the sea, and the sound of the sea at night, as I lay in bed, was beautiful. …  My wages were £3.25 a week and the proprietor, together with his rather capable German wife, charged me £1.50 a week for full board.  Even then I can’t see they made much out of me but I was a ‘perm’ (permanent) and with the winter being very lean for them, they welcomed something coming in all the year.”

An extract from Francis’ memoir, plus papers relating to the wedding, has been contributed to the Letter in the Attic project by Francis and Cynthia’s daughter, Anne Morrison.