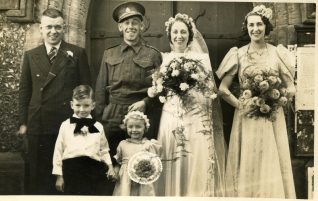 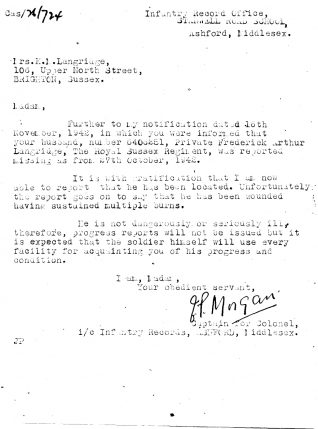 zoom
Letter from the Infantry Record Office to Kathleen Mary Langridge, December 1942
Contributed to the Letter in the Attic by Jill Langridge

Frederick Arthur Langridge was married to Kathleen Mary Stoner at St Nicholas Church, Dyke Road in Brighton on 14th September 1940, the day on which the Odeon cinema in Kemp Town was bombed.

Frederick served as a Private in the Second World War and was reported missing in November 1942. In December of that year, however, Kathleen received notification that he had been ‘found’ although injured and in hospital.

He has been located!

“It is with gratification that I am now able to report that he has been located.  Unfortunatley the report goes on to say that he has been wounded…  He is not dangerously or seriously ill, therefore, progress reports will not be issued but it is expected that the soldier himself will use every facility for acquainting you of his progress…”

A collection of letters and papers related to Frederick Langridge’s wedding and war experiences.has been shared with the Letter in the Attic project by Frederick’s daughter, Jill Langridge.