A landlord writes to Michael Crane, 1968

Michael Crane was born in 1942.  He graduated in 1967 from Leeds University and was doing temporary work in language schools in Brighton at the time of the exchange of letters.

In 1968, whilst living at a hotel in Brunswick Place, Hove, Michael received a letter from the proprietor, complaining that Michael had been entertaining a ‘lady friend’ in his room and by late December, Michael was evicted from the hotel. 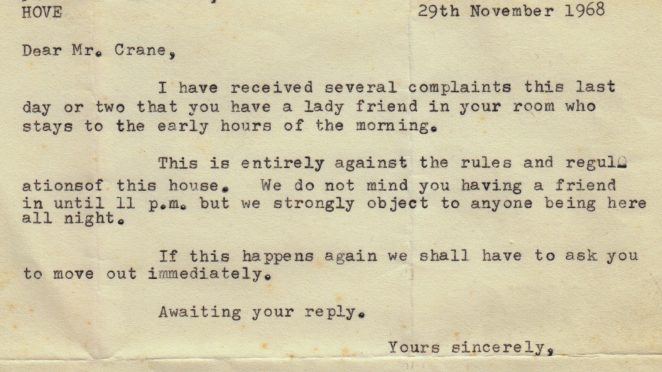 Michael has donated this letter to the Letter in the Attic project.

Entirely against rules and regulations

“I have received several complaints this last day or two that you have a lady friend in your room who stays to the early hours of the morning. This is entirely against the rules and regulations of this house…  If this happens again we shall have to ask you to move out immediately.”