State support for the poor: The Poor Law and the Workhouse

In 1834, the Poor Law Amendment Act established the Parish Union and the Union Workhouse. In theory, this replaced all other sources of charitable aid. After this, the citizens of each town paid their poor rate and it was distributed through the country, with an emphasis on getting people into large institutions. The intention was to equalize the amount paid by rate payers nationally, and get the poor off the streets. 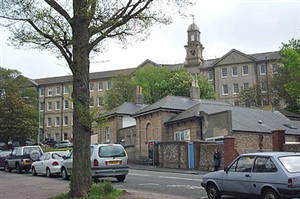 In practice, it did nothing of the kind. The key problem was the workhouse themselves. These prison-like buildings were intentionally made so horrible only the very desperate would go there. Many wealthier people saw the whole system as cruel and backward, and continued their own efforts to assist their fellow man. (Think of the two gentlemen who visit Scrooge in ‘A Christmas Carol’; when he asks if the prisons and the Union Workhouse are still in full vigour, he receives the reply “They are – I wish that I could say they were not.”)  Philanthropists established all manner of funds for those in need, many of them aimed at small and very specific groups. So by the mid Victorian period, the situation was a complex as ever.

Private charitable support for the poor in Brighton

In Brighton, the Union Workhouse stood where the General Hospital now stands. Like all such institutions, its reputation was grim – so much so that in the 1960’s it was often difficult to persuade older residents to even have a check-up there!

On the other hand, there was plenty of support for the poor, both from individuals and other organisations. Among them were: ‘The Chesham Home for Invalids and Convalescents, and those requiring a holiday’. ‘The Convalescent Dinners Society’, ‘The Convalescent Home, Female, London and Brighton’. ‘St. John’s Home for Convalescent and Crippled Children’, ‘The School and Training Home for Orphan Girls’ and ‘The French Hospital and Dispensary’ (for the ‘medical relief of sick poor speaking the French language, without distinction as to religion or nationality’). Each church also contained a Poor Box, which would give further short term relief to parishioners.

The role of the Brighton Mendicity Society

In 1872, the Brighton Mendicity Society was formed. Its aim was to co-ordinate poor relief among the different organisations. Looking at examples of reports from the society, a few point become abundantly clear.   Firstly, its help was practical and limited – a few shillings here and there; sometimes material help, such as a new pair of shoes or a basket for selling fish. It rarely seems to have made regular provision, instead directing applicants to the Union or the parish. Secondly, help was given in what nowadays might seem a very grudging and judgemental way. The language used to describe many of the applicants is interesting – ‘industrious’, for example, is high praise indeed. Students may find this approach shocking, given our modern concept that welfare is a right, rather than a reward for moral uprightness.

Levels of poverty in Victorian England

Students may have little concept of what constituted ‘poverty’ in Victorian England. Was 9s a week bad? It may help to know that in 1902, Roundtree defined a basic poverty line as £1. Clearly, many of the applicants for help are raising large families in very poor conditions on much less than that.