You are here: HomenextCity InsightsnextBrighton and Hove: The Royal Seal

Brighton and Hove: The Royal Seal 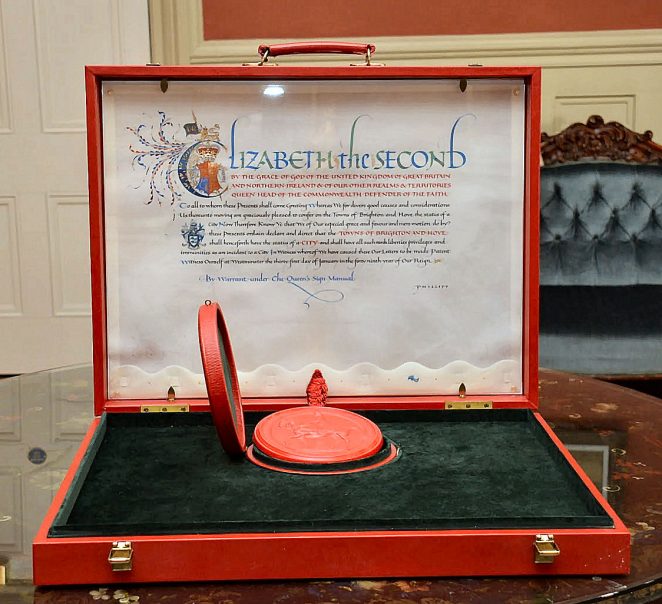 The Royal decree and seal: click on the photo to open a large version in a new window

A new coat of arms

In 2000, Brighton and Hove’s campaign to become a city was successful, and we were granted city status by the monarch. The separate authorities of Brighton & Hove had already become a new unitary authority on 1 April 1997. A new coat of arms was approved at the time by Royal charter; it was based on an amalgamation of the two Armorial Bearings of the former Hove and Brighton Borough Councils.

When city status was approved the city was presented with a Royal Seal to mark the process.  Normally this seal is locked away in the Town Hall, but it was recently brought out so that we could photograph it. The seal is accompanied by a Royal decree which reads:

ELIZABETH the SECOND BY THE GRACE OF GOD OF THE UNITED KINGDOM OF GREAT BRITAIN AND NORTHERN IRELAND & OF OUR REALMS & TERRITORIES QUEEN HEAD OF THE COMMON WEALTH DEFENDER OF THE FAITH.
To all to whom these Presents shall come Greeting. Whereas We for divers good causes and considerations Us thereunto moving are graciously pleased to confer on the Towns of Brighton and Hove the status of a city Now Therefore Know Ye that We of Our especial grace and favour and mere motion do by these Presents ordain declare and direct that the TOWNS OF BRIGHTON AND HOVE shall henceforth have the status of a CITY and shall have all such rank liberties privileges and immunities as are incident to a City. In witness whereof We have caused Our Letters to be made Patent Witness Ourself at Westminster the thirty first day of January in the forty ninth year of our reign. 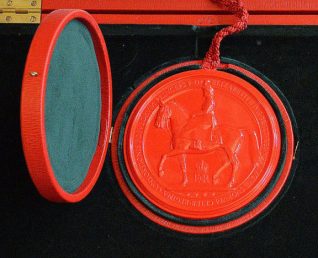 The Royal seal front: click on the photo to open a large version in a new window 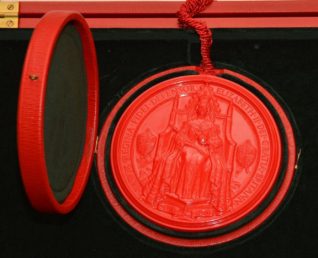 The Royal seal back: click on the photo to open a large version in a new window