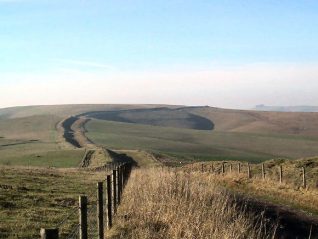 zoom
The South Downs
Photo from a private collection

a) BACKGROUND: The South Downs are a range of chalk hills seventy miles long from Beachy Head to Winchester, reaching 888 feet at Butser Hill, Hampshire, and 837 feet at Littleton Down near Petworth. Sloping gently southwards with a steep scarp to the north, the Downs are up to ten miles wide east of Brighton and represent the southern remnant of a prehistoric ridge that once stretched across the Weald to the North Downs, layers of chalk up to 1,400 feet thick laid over millions of years in some primeval sea. In April 1966 the Sussex Downs were designated a 379-square mile ‘Area of Outstanding Natural Beauty’, including all the open downland in Brighton except the area between Bevendean , Whitehawk , Ovingdean and Woodingdean ; they have also been designated an ‘Environmentally Sensitive Area’. The many dry valleys in the hills were cut by surface running water in the last Ice Age when snow and rainfall were higher, and water frozen in the permafrost prevented any further percolation through the chalk; ‘sludging’ of saturated chalk also played a large part in their formation. These valleys are composed chiefly of ‘Head’ drift (often known as ‘Coombe’ deposits), a mixture of eroded chalk sludge and flint with some clay and sands. There are also small outcrops of sand and clay in the district, but most of Brighton stands on the porous bed of chalk that is the Downs and which provides a giant natural reservoir for the town’s water supply. {2,123,283a,306}