You are here: HomenextTopicsnextParishesnextEcclesiastical and civil 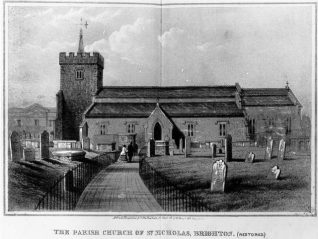 zoom
Parish Church of St. Nicholas, c. 1850s: The church of St Nicholas and its churchyard. The ancient parish church of Brighton dated from the fourteenth century. The church was restored and enlarged between 1852-3 by the architect Richard Cromwell Carpenter, effectively rebuilding it.
Image reproduced with kind permission from Brighton and Hove in Pictures by Brighton and Hove City Council 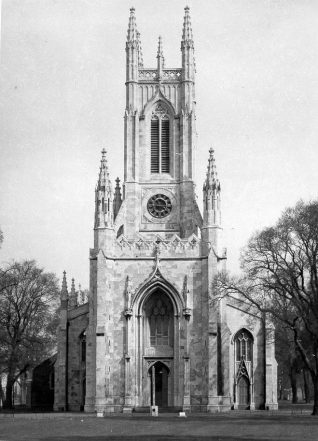 zoom
St. Peter's Church, c. 1930: St. Peter's Church was built in 1824-28 as a chapel of ease to the parish church of St. Nicholas and was consecrated by Dr James Carr on 8 May 1828. Designed in the Perpendicular and Decorated styles by Charles Barry (later to design the Houses of Parliament), the church is one of the earliest Gothic revival churches in the United Kingdom. On 22 June 1873 St Peter's replaced St Nicholas' as the parish church of Brighton. Constructed in Portland stone, the church measured 150 by 70 feet with a clerestoried nave of 5 bays with aisles, galleries, an apsidal chancery and a vaulted ceiling. In 1898-1902 the nave was extended northwards and a new chancel was added by George Somers Clarke.
Image reproduced with kind permission from Brighton and Hove in Pictures by Brighton and Hove City Council

a) ECCLESIASTICAL PARISHES: Parishes originated as the basic unit of ecclesiastical administration, the area served by a parson to whom dues were paid by the inhabitants. The ecclesiastical parish of Brighton (parish church St Nicholas ) remained a single unit until 22 June 1873 when, with nineteen Anglican churches and chapels and a population of approximately 92,000, it was divided into several district parishes; St Peter’s was designated as Brighton’s new parish church, though this was only one of the seven new areas. The present area of the borough was originally divided up between nine ancient parishes (see below), but it is now split into twenty ecclesiastical parishes, all responsible to the vicar of Brighton as rural dean. ( Kemp Town and Preston were also rural deaneries until the 1980s.) {57,300,314}

b) CIVIL PARISHES: As manorial courts gradually fell into decay and various legislation was passed, ecclesiastical parishes gradually became units of secular administration as well, particularly in the sixteenth and seventeenth centuries. Parish vestries, theoretically composed of all parish ratepayers, were authorised to levy rates for poor relief and the maintenance of highways as well as church maintenance, and they also appointed the parochial officers, the beadle, church-wardens and overseers of the poor, to conduct the parish business (see below).
In Brighton, municipal responsibilities belonged to the town commissioners from 1773 until the borough council was established in 1854. The parish, in the form of the vestry (see below), was principally responsible for poor-law administration until 1810 when the ‘Directors and Guardians of the Poor’ (see below) were first appointed, and for burials in the form of a burial board from 1856 until 1902. From 1825 guardians of the poor were annually elected by the parishioners, and even after incorporation they continued to be elected on a parochial rather than a borough basis. Thus Preston parish, which was partly incorporated into the borough of Brighton in 1873, continued to elect representatives to the Steyning Board of Guardians. In 1928 Brighton county borough annexed Ovingdean , Rottingdean , most of Patcham and parts of Falmer , Hove and West Blatchington parishes, and the new county borough area was constituted as a single parish. On 1 April 1930 the Brighton Board of Guardians was replaced by the county borough council, and the last secular significance of parishes in Brighton was thus extinguished. The county borough remained a parish in name until 1 April 1974 when urban parishes were abolished by the 1972 Local Government Act. {14,43,115,300}
The present borough area comprises two complete ‘ancient’ parishes and parts of seven others. No change in parish boundaries occurred until 1894 when Preston was split into Preston and Preston Rural parishes either side of Dyke Road . In the same year the functions of the vestries in the rural parishes were transferred to elected parish councils or to parish meetings. The nine ancient parishes are listed below with their approximate areas given in acres {1,39,109,279}.