You are here: HomenextTopicsnextParishesnextGuardians of the poor

Guardians of the poor 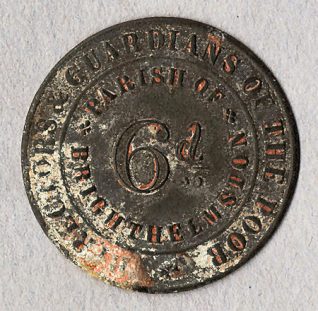 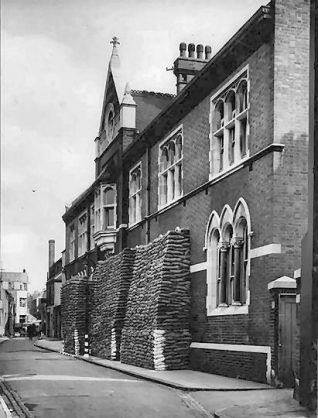 zoom
This photographic print was made by the Borough Surveyor's department. It shows the Public Assistance Office in Prince's Street, Brighton. The entrance to the building is flanked by sandbags. This print was made as part of a record of local provisions against air attack. War with Germany had been declared less than two weeks before this photograph was taken. The building was originally constructed as the Parochial Office for Brighton's Guardians of the Poor. This was an elected board that was responsible for the welfare of the poor in Brighton. One of its most important roles was overseeing local workhouses. After the Guardians of the Poor were dissolved, the building was used by a variety of organisations. In addition to its use for Air Raid Precautions, it also served as a temporary home for the magistrate's court between 1986 and 1989. The building has since been converted into flats. Transfer
Reproduced courtesy of Royal Pavilion, & Museums, Brighton & Hove

e) GUARDIANS OF THE POOR: The Poor Law Act of 1601 gave the responsibility for relief of the poor to the parish overseers, who were appointed by the parish in vestry. Under the terms of the 1810 Brighton Town Act, this responsibility was transferred to thirty ‘Directors and Guardians of the Poor’ to be nominated annually by the town commissioners, although the vicar, high constable, church-wardens and overseers were ex-officio guardians. They were required to set their paupers to work, to form themselves into six committees which met once a week with quarterly meetings of them all, and were authorised to borrow up to £10,000 for the construction of a new workhouse. One of their first actions was to ‘improve’ the workhouse diet in the interests of economy. The 1825 Brighton Town Act gave the election of guardians to the parish ratepayers, but kept the ex-officio members. From 18 March 1871 however, the Brighton Directors and Guardians were replaced by a board of ‘Guardians of the Poor’ responsible to the Local Government Board (replaced in 1919 by the Ministry of Health), and were required to care for both the ‘outdoor’ poor and those in the workhouse; conditions in the workhouse were made deliberately unpleasant to encourage inmates to go out and find work.
Initially meeting in one of several inns in the town, the guardians moved to offices in the new Town Hall in about 1832, and from 1856 occupied the present public library building. On 7 May 1895 new parochial offices were opened in Prince’s Street after they had accepted a corporation offer of £7,000 to move for an enlargement to the public library. Following the 1894 Local Government Act, the guardians were elected on the basis of three per ward instead of by the electors in vestry, but still on a parochial rather than borough basis; thus the guardians elected for the parish of Preston, despite it being part of the borough of Brighton, sat on the board for the Steyning Union. The Brighton Guardians were increased to fifty-seven in number on the creation of ‘Greater Brighton’ in 1928 when the parish was extended to cover the whole of the new county borough area, but the board of guardians was dissolved on 1 April 1930 when it was replaced by the county borough council’s public assistance committee under the 1929 Local Government Act.
{14,95,112,115,300}