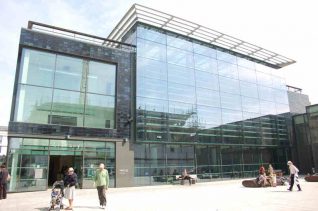 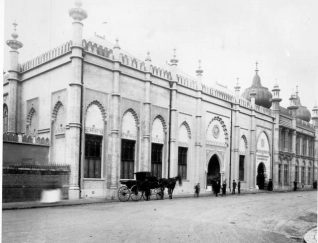 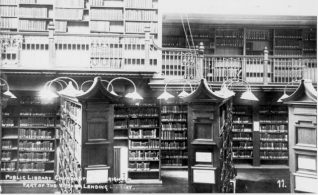 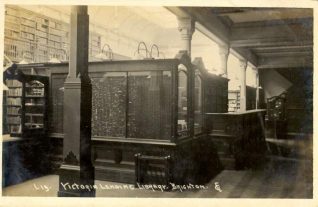 zoom
Victoria Lending Library , c. 1910: Victoria Lending Library was opened on 16 October 1889 by the Mayor William Sendall with a stock of over 17,000 volumes in rooms now part of the Museum and Art Gallery, Church Street. To accommodate the steadily increasing stock and members, the library transferred to a larger room, reopening on 5 November 1902
Image reproduced with kind permission from Brighton and Hove in Pictures by Brighton and Hove City Council 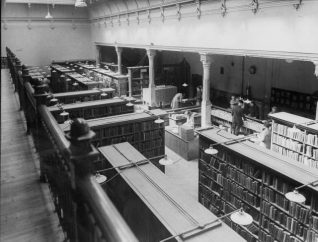 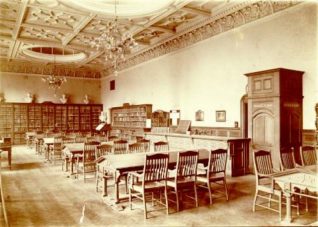 a) REFERENCE LIBRARY: Brighton’s public library was established when the Royal Literary and Scientific Institution closed in 1869 and presented its large collection of books to the town. Together with some other collections which had been bequeathed to the corporation, the institution’s books formed the basis of a reference library which opened in some of the upper rooms of the Royal Pavilion in 1869.

This accommodation soon proved inadequate and so the former royal servants’ quarters, coach houses and stables, which were built in 1832 to the east of the Dome, were remodelled as a library, museum and art gallery by borough surveyor Philip Lockwood; the exterior was unaltered but the interior was fitted out in Moorish style. The new free public library, which was for reference use only, was opened on 12 September 1873 by Dr Carpenter of the British Association. The entrance to the building, which may still be seen from the outside, led directly into the large central hall which is still used by the art gallery and museum; the library occupied two large rooms overlooking the Pavilion grounds to the east of the entrance. By 1885 the stock had reached 15,000 volumes, and opening times were from 10 a.m. to 5 p.m., and again from 7 p.m. until 10 p.m.

b) LENDING LIBRARY: Approval for a free public lending library was given by the council in July 1888, and a chief librarian, Mr F.W.Madden, was appointed for the first time. The Victoria Lending Library was opened by the mayor, William Sendall, on 16 October 1889 with a stock of over 17,000 volumes.

c) REBUILDING: As the public library grew ever more cramped, so plans were made to use the parish guardians’ rooms to the west. However, this area was not released until 1895 when the new Parochial Offices opened in Prince’s Street, and it was then used for a time as a magistrates’ court while the Town Hall was remodelled. Reconstruction as a library eventually commenced in April 1901, and the new lending and reference libraries were opened to the public in their present positions on 5 November 1902. The exterior was considerably altered with the construction of a new entrance and the addition of Indian ornamentation and minarets; the old entrance lies below the clock, but the later exterior can be seen to have a different style from the original facade. A newspaper reading-room was provided in the present ticket area, while the rooms previously occupied by the library were taken over by the museum and art gallery which were enlarged at the same time; the total cost of the alterations was £50,000. The library, museum and art gallery are now listed as buildings of special architectural interest.

d) FURTHER DEVELOPMENTS: The children’s library was established in 1928 and moved to the adjacent North Gate House in 1930, but it has since returned to the main building. The music library was established in 1964 at the former gas company showrooms on the opposite side of Church Street. The newspaper reading-room, which had occupied the present library ticket area, moved to the first floor of the music library, but has since been incorporated with the reference library. The ticket-issue system was computerised in November 1969, one of the first systems in the country.

In 1974 East Sussex County Council assumed control of the library service, and there has been a marked decline as cut-backs in stock and opening hours have taken effect. The central library, little changed from the time of its opening in 1902, has been extremely cramped for many years, but nothing has yet come of plans for its replacement. The reference library is particularly rich in local material and has received many collections as gifts and bequests; it now has in the order of 130,000 books and over 100,000 illustrations. However, a desperate lack of space prevents it from becoming one of the finest in the country.

For details on branch libraries refer to the entries on those localities.