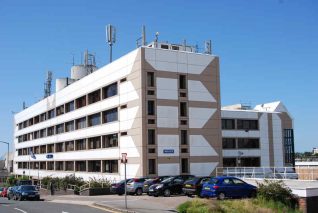 zoom
John Street Police Station
Opened in 1965: 'one of the ugliest of the town's public buildings'

b) CORPORATION CONTROL and GROWTH: By 1854 the force comprised ten officers and fifty-one men, and in that year came under the control of the watch committee of the newly-formed Brighton Borough Council ; indeed, the council’s first act was to raise the force’s strength by ten men, and to appoint a police surgeon and a plain-clothes detective. In 1855 the tail-coat uniforms were replaced by frock-coats, and in 1868 top hats were replaced by helmets.
By 1865 the force’s strength had increased to one hundred officers and men. Further increases were made steadily over the next seventy years such that the total strength by 1901 was 150, 200 by 1921, 219 by 1938, 256 by 1956, 327 by 1961, and 424 by 1967; the first women were appointed in 1918. During the Second World War , from 1 April 1943 until 31 March 1947, a single force operated throughout Sussex. On 1 January 1968 the Brighton County Borough Police Force was combined with the East Sussex, West Sussex, Eastbourne and Hastings forces to form the Sussex Constabulary, based at Malling House, Lewes. Brighton is now a sub-division of the Central Division of the Sussex Constabulary.
The Brighton force was distinguished by its use of white helmets each summer from 1933 until 1939, and again between 1952 and 1968. It was also the first force in the world to operate with personal radios, one-way only from the central station to the constable from September 1933. {163,164}

c) CENTRAL POLICE STATION: The watchmen were first based at the old Town Hall in Market Street , which had a primitive lock-up known as the ‘Black Hole’. A new watch station was included when the present Town Hall was erected in 1830-2 in Bartholomews. Although condemned in 1929 by the Inspectorate of Constabulary, Brighton’s main police station remained in a large basement department at the Town Hall until a new station was built in John Street . Designed by borough engineer Percy Billington, the new Brighton police station was opened on 27 September 1965 by the Home Secretary, Sir Frank Soskice, but must be included amongst the ugliest of the town’s public buildings. {112,123,163,164}