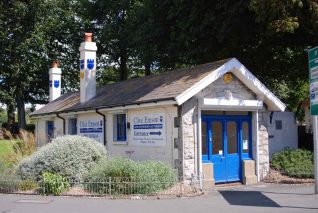 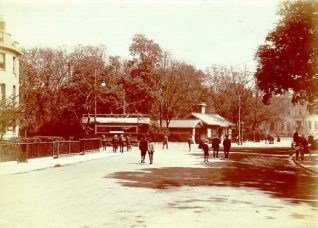 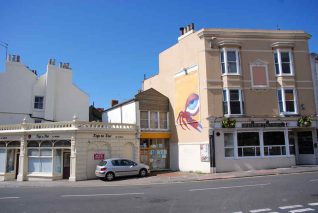 d) DISTRICT POLICE STATIONS: The first district police station was established in about 1857 at 64 St James’s Street , a building with a balustered roof and urn decorations that still stands near the corner of Grafton Street; in 1885 it was replaced by no.2 Freshfield Road. Other district stations were established at the south-western end of the Level (c.1865-1919), 26 West Hill Road (1876-1919), and at Preston Circus fire station from 1903. No.18 Middle Road, Preston, was a police station by 1871, while Patcham police station was established by 1888 on a site now occupied by the Homeleigh flats in London Road . Rottingdean police station stood on the western side of the High Street by 1888, between Marine Drive and West Street, and moved to a house in West Street in 1916. There was a second station in Rottingdean parish in the 1880s and ’90s at 25 Rifle Butt Road, Black Rock.
In 1928 however, most district police stations were discontinued, to be replaced by special telephone call-boxes; the Rottingdean station continued until 1931, though. A new Rottingdean station opened in 1959 at 53 Marine Drive.
In 1947 a police training school was established in some large villas at 21-27 Wellington Road. Two years later the school was converted into a police station, and the town was then divided into A and B divisional areas based at the Town Hall and Wellington Road. The Wellington Road station closed when the new John Street station opened in 1965, and the buildings were replaced by blocks of flats.
{83,163,164}