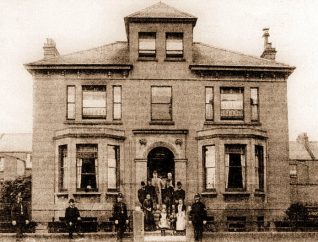 51 Clarendon Villas c.1890 with staff members and residents posing for the camera. Click on the photo to open a larger image.

In March 1890 a Convalescent Police Seaside Home was opened in West Brighton to provide  convalescent care for injured police officers in the south east. The establishment at 51 Clarendon Villas was the first of its kind in the country.

The work of philanthropic thinkers

The idea for a convalescent home near the sea where  policemen could receive care in comfortable surroundings in time of sickness was proposed by the well known philanthropist Miss Catherine Gurney.  Miss May Griffin had found the property in Brighton, also known as ‘Lisburn House’ Police Home of Rest, while a Miss Bell generously provided the sum of £500, which was enough to pay the rent for three years. The home was run by of  Mrs Fanny Marsh, Matron, with  Miss May Griffin as Honorary Secretary and Mr Thomas Cave, Esq., J.P., of 4 Eastern Terrace, Brighton, acted as Honorary Treasurer. 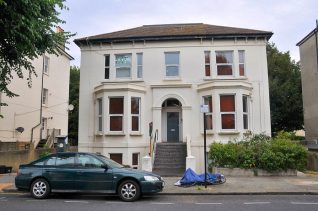 51 Clarendon Villas photographed in 2010. Click on the photo to open a larger image.

The establishment offered  accommodation for sixteen but was “small and ill-adapted”, however it was a great success. In  a letter to a newspaper dated 8 September 1891 Miss  Gurney reports that nearly 300 policemen of all ranks had received care at the charge of 8s a week. Many smaller premises offered a bed or two for the use of police officers needing convalescent care but the Home showed that a dedicated  establishment was needed. Records show that 51 Clarendon Villas  also housed the “Southern Counties Police Orphanage” which cared for 5 children from police families, this  relocated to Sutton at some point after the opening of the new home and then again to Redhill in 1895; by 1899 51 Clarendon Villas  was a private address.

A dedicated establishment is built

The success of the home highlighted its shortcomings in the number of men it could offer accommodation to at any one time and so proposals were made for a purpose built Convalescent Seaside Home and work began on planning and fund raising in 1891. The new premises were to be located at 11 Portland Road.