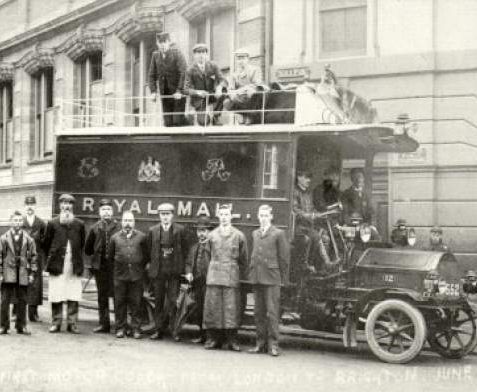 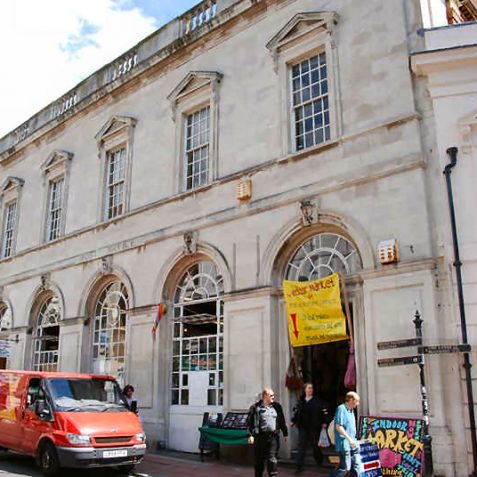 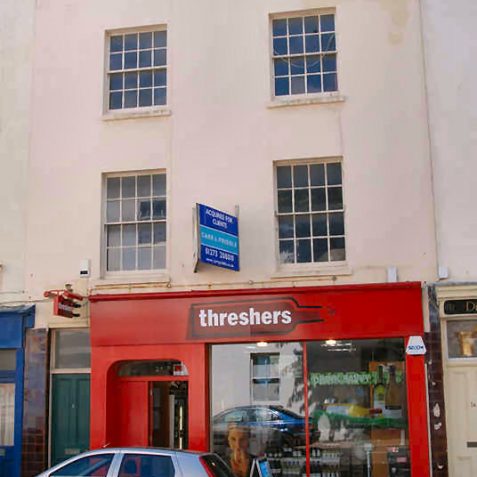 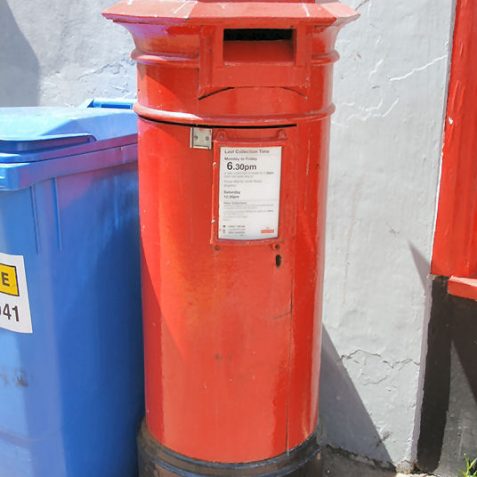 A 'Type A' pillar box at Montpelier Road/Western Road. One of only four still in service.
Photo by Tony Mould

c) DEVELOPMENT OF THE POSTAL SERVICE: By 1823 mail collectors ringing bells were accepting letters at the cost of one penny, and they continued collecting until 1846. In 1830 receiving houses were established at 90 St James’s Street; 50 Preston Street; 17 St George’s Place; and in 1832 at 2 Rock Street. Soon after, a central area of the town was defined from Cannon Place to Charlotte Street and north to Sussex Street, outside of which a surcharge of one penny was made for deliveries; this inner district was later extended to include the London Road area, but surcharges were dropped when the universal ‘penny post’ was introduced on 10 January 1840.
At this time the Brighton postal service had three clerks, fourteen letter carriers, and three messengers for Hove , Hurstpierpoint and Rottingdean . There were two deliveries daily and four receiving houses, with houses also at the villages of Ovingdean , Preston and Rottingdean . By 1848 further receiving houses had opened at 56 Marine Parade , 7 Belgrave Terrace (now part of Marine Parade at Belgrave Place), 66 King’s Road , and at the western side of Queen’s Road Quadrant.
The town’s first pillar-box was erected in March 1858 in Lewes Road opposite the Percy Almshouses ; another followed at the Seven Dials by July 1858, and in December another five appeared at the corners of Montpelier Road and Western Road ; Old Steine and Marine Parade ; Marine Parade and Marine Square; at Sussex Square; and at Holland Road, Hove. The Montpelier Road/Western Road box survives and is now listed as being of special interest. Built to the first national standard type-A design, it is thought to be the one of only four of its type remaining in service and has a distinctively shaped top {44}. (Brighton has another unusual pillar-box at the corner of Dale Crescent and Warmdene Road, Patcham, a rare Edward VIII model.)
From August 1869 there were four deliveries daily, with two a day to Preston , Patcham and Rottingdean . There were also thirty-five pillar- and wall-boxes with seven daily collections, and sixteen receiving houses with another two added in 1879-80. By 1892 there were five branch offices manned by head office staff, thirty-six receiving offices, and sixty-eight boxes with ten to twelve collections daily (!); in that year the receiving houses were redesignated sub-post-offices. Branch offices were opened at Cannon Place (1891, replacing the West Pier kiosk); Church Road, Hove (1882); College Road (1887); Western Road /Hampton Place (1973, but at Dean Street from 1890, and former Boots store 1928-66); Melville Road, Hove (1930); Oxford Street (1929, relocated 1967); St James’s Street (1910); and Western Road, Hove (1885).
Brighton is now the centre of a large postal area stretching westwards past Arundel, northwards to Hurstpierpoint, and eastwards to Pevensey. The sorting office now handles over 1 million letters and packets every day.