At the end of the nineteenth century the town had the following postal offices:
A Head Post Office in Ship Street under the charge of Wilson A. Hetherington, Esq., Postmaster (opened on 26 March 1849 – closed 26 May 2007) and four Branch Offices situated at Church Road; Cannon Place; 1, College Road, Hove; and 123, Western Road, Hove. There were also upwards of 40 Sub-Post Offices throughout the town. The following were the most important because they were also Telegraph Offices: 5, Alma Terrace; 17, Old Steine; 152, Marine Parade, Kemp Town; Preston; 72, Cowper Street; 13, Preston Road; 45, Dyke Road; 50, Queen’s Road; 6, Lewes Road; Victoria Road; 9, North Road; 1, York Place. 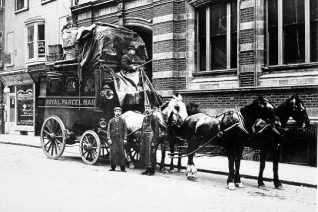 Brighton to London Royal Mail Parcel Post coach and coachmen c.1900; the horse drawn service last ran on June 1st 1905 when it was replaced by a motorised mail coach

Opening times
The Head Post Office in Ship Street was .open from 7 a.m. till 10 p.m. Monday to Saturday for general enquiries and the sale of stamps; on Sundays it opened from 7.00 a.m. till 9.00 a.m. The Ship Street building also housed the main Telegraph Office and this was only closed between the hours of midnight on Saturday to 7.00 a.m. on Sunday. Because it was manned continuously Telegrams could be sent and stamps could be obtained from the Night Telegraph Office at any time. Local post offices also operated the Post Office Savings Bank which started in 1861. 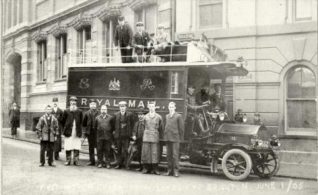 The first motorised mail coach from London to Brighton June 1905; this picture is taken outside the Head Post Office in Ship Street with driver and post office workers.

Local Collections and deliveries
There were six deliveries of letters Monday to Saturday the first at 7.00 a.m., and the last at 7.00 p.m. There were also six collections a day Monday to Saturday; latest time for posting local letters for same day delivery was: Ship Street, 6.15 p.m., and at the  Railway Station 6.30 p.m. Any letters posted after 9.00 p.m., or before 5.30 a.m., weekdays, were collected and sent out by the first delivery. There was only one Sunday delivery, commencing at 7.00 a.m. and mail from letter boxes in the town was collected once at 6.00 p.m.

Mail going outside the town
There were thirteen dispatches of letters for London and places beyond. The first of these was dispatched from the General Post Office at 7.00 a.m., and the last 10.00 p.m. The latest hour for posting parcels was 9.50 p.m. and the latest for registration of letters or parcels was 9.30 p.m. Letters could be registered until 9.00 a.m. on Sundays.

At the turn of the 20th century:
The post office services covered an area bounded by Preston (2 miles to the north), Kemp Town (extending 1 mile to the west) and Portslade (2 miles to the east). This area was served by approximately 45 postal offices as described above. Mail was collected and delivered 6 times a day and once each on Sundays. The General Post office was responsible for telegrams and later telephone services in addition to mail. 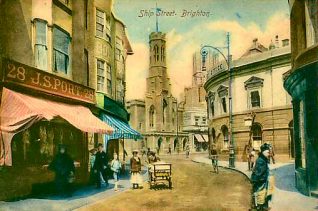 At the turn of the 21st century:
The area covered has expanded to encompass Falmer (4 miles to the north), Saltdean (5 miles to the East), and the county boundary with West Sussex (4 miles to the west). This vastly larger area was served by 71 post offices in 1999; by 2008 this number has reduced to 42. From 2004 mail has been delivered once per day; Sunday service ceased in 2007 and Saturday deliveries may soon end. Letters can be collected from letter boxes at post offices at various times during the day but the majority of other boxes have a single daily collection. Today the Royal Mail only handles letters and parcels.

Changes in numbers of Post Offices 1999 – 2005 (by parliamentary ward )
http://www.telegraph.co.uk/news/migrationtemp/1532874/Analysis-of-Post-Office-closures.html