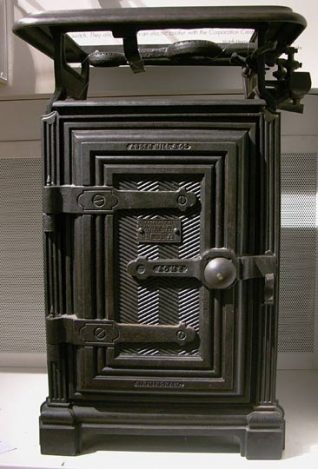 a) The FIRST SUPPLY: The first gas supply in the town was established in 1818-19 by the Brighton Gas Light and Coke Company which built a coal-gas production works at Black Rock. (These works were deliberately sited just outside the Brighton parish boundary to avoid the payment of the local coal-tax (see ” Coastline (Groynes)”), and were the first portent of the new industrial age in Brighton.) The Pavilion Grounds were the first area to be lit and gas lighting was installed throughout the principal rooms of the Royal Pavilion itself, but many townsfolk feared explosions from the new energy source and petitioned Parliament against the new development. In order to reassure the public the company illuminated a Prince of Wales’s feathers sign on Mr Stone’s shoe-shop at the corner of East Street and Steine Lane on 12 August 1819; it seemed to have the desired effect as gas lighting was then taken up by the residents.

b) The RIVAL COMPANY: In 1825 a second concern, the Brighton and Hove General Gas Company, established a works adjacent to St Andrew’s Church , Hove, and continued manufacturing gas there until 1871 when a large new works was opened on the southern arm of Shoreham Harbour at Portslade-by-Sea .
On 1 January 1882 the Brighton and Hove General Gas Company absorbed its older rival, and in 1885 all manufacture was transferred to the Portslade works; the Hove and Black Rock sites were then used for storage only. Following many initial complaints the luminosity and pressure were also improved. In the sixty-five years from 1860 to 1925, annual gas demand rose from 100 million cubic feet to 2,230 million cubic feet, necessitating the rebuilding and enlargement of the Portslade works in the 1920s. In 1931 the company absorbed the Worthing Gas Company to become the Brighton, Hove and Worthing Gas Company; the Littlehampton company was absorbed in 1934. During the war the Portslade works were a target for German bombers, as was the Black Rock depot where a direct hit resulted in a spectacular orange flame some 300 feet high.
In 1882, the Brighton and Hove Gas Company opened offices and showrooms in the large, bow-fronted building at 77 West Street, now Swifts cocktail bar; from 1925, the present music library in Church Street was also used.

c) NATIONALISATION and NATURAL GAS: The gas supply industry was nationalised on 1 May 1949, and the Brighton, Hove and Worthing Gas Company was absorbed into the South-Eastern Gas Board (SEGAS). The Portslade works were rebuilt in 1949-54, and the local offices were removed from West Street to Black Rock in 1964. During the 1960s a massive operation was undertaken to change all fittings for natural gas consumption, supplied from fields under the North Sea. This resulted in the closure of the Portslade works, and they were eventually demolished in about 1970, much to the relief of the nearby residents who complained about the permanent smell. In 1989 the Hove gas-holder was also demolished.